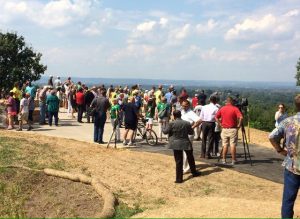 After years of planning and months of work, the revamped and freshly-completed North Overlook project in South Louisville’s Iroquois Park was unveiled to the public today by a group that included Mayor Greg Fischer, Councilwoman Marianne Butler and officials from Metro Parks and Recreation and the Louisville Olmsted Parks Conservancy.

“The view from the top at the North Overlook is as spectacular as ever, and once the surrounding native grasses and other plantings have a chance to grow in, the whole experience at the summit will really be enhanced,” Mayor Greg Fischer said. “The work cements Iroquois Park’s position as one of the premier tourist destinations in the South Points Scenic Area.”

“The opening of this serene and scenic overlook is a testament to the dedication of the employees at Metro Parks and Recreation and the Olmsted Parks Conservancy.  Living in the shadow of the park for over two decades, I understand the draw and the majesty of the park,” said Councilwoman Marianne Butler (D-15).  “The park users, my neighbors and future generations will benefit and appreciate this view for years to come.”

Feedback gathered from the public during two public meetings in summer 2014 resulted in many of the improvements. A meandering, wheelchair-accessible path now takes the park user to a spectacular area with improved vistas of downtown Louisville and the Indiana Knobs, where the panorama is widely acknowledged as the best in the area.

Visitors will enjoy sitting on a rustic stone bench or in the grassy picnic areas. Native trees, shrubs, and herbaceous plants populate the walkway and several stormwater retention basins, which help control erosion. The vegetation likely won’t begin realizing its true potential until next spring, according to officials.

Crews used the demolished remains of the old overlook to raise the elevation of the path and make it gentler in its approach to the new North Overlook, which was also raised by almost 6 feet. The recycling of the old materials allowed Metro Parks and Recreation and the Olmsted Parks Conservancy to save $34,500 on the project cost.

Video cameras perched near the North Overlook will be monitored and are meant to reduce vandalism, which has taken place at the Overlook over the years. Iroquois is open to motor vehicles only on Wed., Sat., and Sun. but open to walkers and cyclists all days from April through October.

Iroquois, established in 1891 and is Louisville’s second-oldest park, is one of Louisville’s 18 Olmsted-designed parks. It is also known as one of the “Big Three,” along with Shawnee and Cherokee parks, that Frederick Law Olmsted correctly envisioned would anchor the city’s system of parks and parkways around which Louisville would grow.

After years of planning by Metro Parks and Recreation and the Olmsted Parks Conservancy, construction began on the $1.4 million project – funded jointly by the two organizations – last fall. A wet spring led to some delays in the delivery of the sandstone used for the seat wall and pushed the project deadline back a few months.

“It was important this project be done properly, and visitors to the North Overlook will see it was,” said Seve Ghose, Director of Metro Parks and Recreation. “This outstanding new feature at the top of the park is something we’re proud of as a department, and we hope it’s something that’s enjoyed by generations of park users to come.”

“Frederick Law Olmsted designed parks to provide a respite from the congestion and noise of urban life. We are proud to complete a project like the North Overlook that gives our community such a place:  the epitome of quiet and majesty in a busy, hustle-bustle world,” said Mimi Zinniel, President and CEO of the Olmsted Parks Conservancy.  “Iroquois Park is a jewel that our community deserves.  We are thrilled so many people throughout the city invested in making this project come to life.”

Posted in Travel and Tourism | Tagged Metro Parks, Things to Do, Tourism