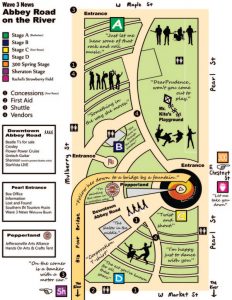 The annual Abbey Road on the River festival, a five-day celebration of The Beatles and their music, will run from May 25 through 29th in Jeffersonville.

The festival has moved across the river to Jeffersonville, so fans who have attended in the past when Abbey Road was hosted on the Louisville Waterfront, may need help navigating the new venue.

To help with that, the 2017 AROTR venue map showing the festival’s four main outdoor stages in Big Four Station Park, as well as the other event venues, has just been released.

The Budweiser Stage A is located at the northwest corner of the park, Stage B is in the middle of the park, Four Roses’ Stage C is located just off the Big Four Bridge ramp, and Stage D is near the south end of Big Four Station Park.  Additional performances will be held at the Clarion and Sheraton hotels as well as in other area venues.

In addition to the map, the finalized schedule for the 2017 lineup has been published and is now available on the Abbey Road on the River website.  This year’s lineup includes dozens of acts, including Herman’s Hermits, The Family Stone, Mark Lindsay of Paul Revere & the Raiders, Steve Holley, and many more.

A free concert starring starring Jake Clemons from Bruce Springsteen and the E Street Band on Thursday, May 25 marks the start of the 2017 festival.  Tickets are available online.