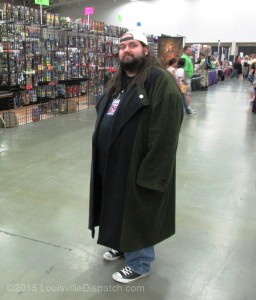 FandomFest is the largest Comic Con in this region that has been visiting Louisville since 2005.  This year, Fandomfest will be July 28th-30th at the Kentucky Exposition Center.

This year’s Fandomfest schedule has not yet been finalized, but many celebrities are slated to make an appearance for a photo op, autograph, and maybe a Q&A. Some celebrities that attendees will have the chance to see this year include: Weird Al Yankovic, WWE Hall of Famer Sting, Steve Sanders, Tori Spelling, the cast of Disney’s animated Beauty and The Beast, Paul Michael Glaser, Matthew Lillard, Skeet Ulrich, and Ross Marquand.

The show will also feature a market place where new authors and artists will display their works, collector items, costumes, and anything else that you can imagine will be available as well. Though the schedule is still pending, the show usually features a variety of panel discussions, which will focus on different aspects of the comic con world, some demonstrations (such as improve comedy or condensed Shakespeare plays), and Q&A’s with the celebrities.

Attendees are encouraged to wear costumes to the show, but it is not required. Tickets can be purchased in advance online . Prices range from $30 to $325 depending on the package that is desired. Photo Ops (price range $40 – $160 per photo) and Autographs (price range $25 – $60 each) cost extra and can also be purchased online. It is recommended that you purchase your passes in advance since the show is cash only. No credit cards will be taken at the gate, but ATMs will be available. Attendees will also need to pay for parking at the Exposition Center, which is $8 per vehicle.