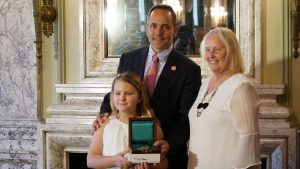 Established by industrialist Andrew Carnegie in 1904, this award recognizes individuals who risk their lives to an extraordinary degree in attempting to save others. Since its inception, 159 Kentuckians have earned this honor.

“While bittersweet, it is an honor and privilege to recognize Kentucky heroes like Lou Scharold and the family of Lori Kearney,” said Gov. Bevin. “These are powerful stories for all of us, and we are thankful for their heroism.”

Lori Doppelheuer Kearney, 35, died attempting to save her sons Christopher Kearney (age 10), Eagan Hargis (age 3) and Kieran Hargis (age 20 months) from a fire at their Maysville home on Oct. 20, 2015. After being awoken by the fire, Lori helped four first-floor occupants of her house escape. She then headed upstairs through dense smoke in an attempt to rescue her children on the second floor. Lori was found on the floor of the younger boys’ bedroom, cradling Kieran, with Eagan and Christopher lying nearby. All four had died of smoke inhalation.

Lou Scharold, 72, saved Rumpke truck driver Brian Ashcraft after his vehicle was struck nearly head-on by a pickup truck traveling the wrong direction on U.S. Highway 27 in Campbell County on April 25, 2016. Despite intense heat, Scharold reached through the broken-out windshield of the refuse truck, grasped Ashcraft by the arm, and led him away from the burning vehicle to safety. Ashcraft is still employed by Rumpke (currently in his 24th year of service) and says he is “forever thankful” that Lou came to his rescue.

The Facebook Live video of the full ceremony can be accessed here. 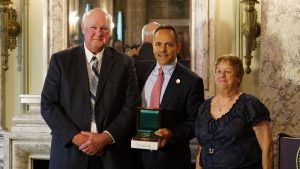