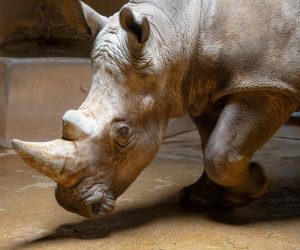 Meet Letterman — a new 3-year-old male southern white rhinoceros comes to the Louisville Zoo from The Wilds in southeast Ohio. The rhino was named by Jack Hanna after the late night television host and comedian David Letterman. Letterman was born on November 12, 2014 at The Wilds.

Letterman has completed his standard 30-day quarantine and will soon join 34-year-old female Sindi in the exhibit. As with any new animal introductions, the rhinos will be monitored. Introductions of unfamiliar rhinos can often result in sparring from both males and females, which is normal behavior. These normal interactions and dynamics in a rhino group can occasionally result in a superficial injury. The rhinos are regularly evaluated by the Zoo’s veterinary staff and any observed injuries are treated under their expert care. Once the rhinos are familiar with each other and their roles are established, they will usually engage in calmer interactions.