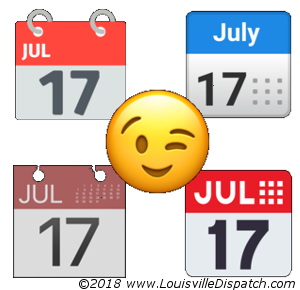 World Emoji Day is celebrated on July 17, a date chosen because it is the date shown on the “calendar” emoji on most systems, including Apple iPhones and iPads, Android phones, Google services, Mozilla-based browsers, and EmojiOne. It is worth mentioning, however, that some holdouts like Twitter, Facebook, and WhatsApp aren’t on board with the July 17 emoji, opting to show a different date or a generic calendar page.

Growing out of old-school internet “emoticons” crafted from punctuation such as the :-) smile and ;-) wink, what we now know as emoji originated on mobile phones in Japan around 1999, before becoming increasingly popular worldwide nearly a decade later after being added to several major mobile operating systems. Emoji are now considered to be a large part of popular culture – in fact, in 2015, Oxford Dictionaries named the Face with Tears of Joy emoji the “‘Word’ of the Year.”

The minuscule pictograms are so popular that they even gave rise to the 2017 film, “The Emoji Movie,” featuring the voices of T. J. Miller, Anna Faris, Rob Riggle, Jennifer Coolidge, Christina Aguilera, Sofía Vergara, Patrick Stewart, and other big name stars.

The World Emoji Day website gives some background on the celebration and gives a few ideas of how you can mark the occasion, including tips on throwing an emoji-themed party.

So go ahead: text, tweet, and post your favorite emoji to everyone you know today using the hashtag #WorldEmojiDay.  And don’t forget to vote for your favorite in the World Emoji Awards.