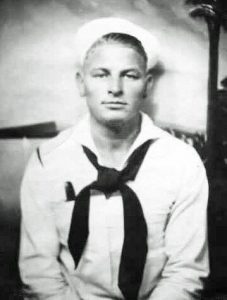 Gov. Matt Bevin has directed that flags at all state office buildings be lowered to half-staff today, in honor of a Kentucky serviceman who was killed in action during World War II, but whose remains were only recently identified.

Navy Fireman 1st Class Billy J. Johnson, 22, of Caney, was assigned to the battleship USS Oklahoma, which was moored at Ford Island, Pearl Harbor, when the ship was attacked by Japanese aircraft on Dec. 7, 1941. The USS Oklahoma sustained multiple torpedo hits, which caused it to quickly capsize. The attack on the ship resulted in the deaths of 429 crewmen, including Johnson.

In September 1947, tasked with recovering and identifying fallen U.S. personnel in the Pacific Theater, members of the American Graves Registration Service (AGRS) disinterred the remains of U.S. casualties from the two cemeteries and transferred them to the Central Identification Laboratory at Schofield Barracks. The laboratory staff was only able to confirm the identifications of 35 men from the USS Oklahoma at that time. The AGRS subsequently buried the unidentified remains in 46 plots at the National Memorial Cemetery of the Pacific (NMCP), known as the Punchbowl, in Honolulu. In October 1949, a military board classified those who could not be identified as non-recoverable, including Johnson.

Between June and November 2015, Defense POW/MIA Accounting Agency (DPAA) personnel exhumed the USS Oklahoma Unknown remains from the Punchbowl for analysis. To identify Johnson’s remains, scientists from DPAA used anthropological analysis, as well as circumstantial and material evidence. Additionally, scientists from the Armed Forces Medical Examiner System used mitochondrial DNA (mtDNA) analysis. DPAA is grateful to the Department of Veterans Affairs and the Department of the Navy for their partnership in this mission.

Of the 16 million Americans who served in World War II, more than 400,000 died during the war. Currently there are 72,692 still unaccounted for from World War II, of which approximately 30,000 are assessed as possibly-recoverable.

Johnson’s name is recorded on the Walls of the Missing at the Punchbowl, along with the others who are missing from WWII. A rosette will be placed next to his name to indicate he has been accounted for.

Johnson will be buried today in Santa Fe, New Mexico.

All individuals, businesses, organizations, and government agencies are encouraged to join in this tribute of lowering the flag to honor Navy Fireman 1st Class Johnson.