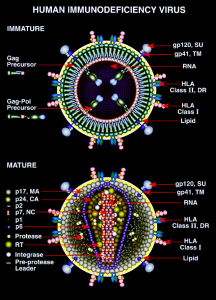 There are now 79 new cases of HIV confirmed in southern Indiana since January and many potential cases that are pending further testing.  The bulk of these cases seem to be centered around Scott County.  Frightening numbers from a county that sees only about five new cases a year.

The Indiana State Health Commissioner, Dr. Jerome Adams says that majority of the cases have been linked to needle sharing and the intravenous use of drugs, including Heroin as well as prescription painkillers such as Opana.  The Centers for Disease Control (CDC) were also in the area to help with the investigation and their findings have led to the outbreak being called an epidemic.  As a result, the Governor of Indiana, Mike Pence, signed an executive order Thursday, March 26th, declaring a public health emergency in Scott County, calling it an “all hands on deck” situation.

Despite the HIV outbreak centering around Scott County, Pence said “this is not a Scott County problem; this is an Indiana problem.”

As a part of the efforts to combat the epidemic, Pence has authorized a temporary needle exchange program – generally barred by Indiana law.  The program allows individuals to turn in used needles to get clean ones.  Pence has also ordered the state health department to establish a mobile unit to help enroll people in a state-run health program and set up an HIV and substance abuse treatment command center.

Pence said of the situation, “This is a public health emergency and I’m listening to my health department, I’m listening to the Centers for Disease Control and I’ll make my decision based on the best science and the best way we can stop this virus and stop this outbreak in its tracks.”

HIV, human immunodeficiency virus, is a type of retrovirus that causes the acquired immunodeficiency syndrome (AIDS) – an infection which leads to progressive failure of the immune system and allows life-threatening opportunistic infections and cancers to thrive.  HIV can take several months to appear in a person’s system after they are infected.  As such, health officials recommend that individuals who have participated in risky behavior, including needle sharing, to be tested for HIV immediately as well as testing again in three months.