How to Increase Your Drug Dealing Profits? Turn in Your Competition. 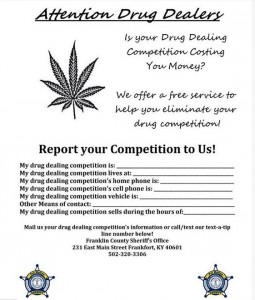 Franklin County Sheriff Pat Melton says he got the idea from another sheriff in Georgia.  The Sheriff’s Office has been receiving thousands of online likes and shares of a post that offers their “free service to help you eliminate your drug competition.”  Melton claims to have had over 100,000 people engaged by the social media post.

The campaign has led to hundreds of calls and double-digit “credible tips” about local drug dealers.

The post included a form to fill out with relevant details to help the police with their investigation, along with an address to which the form could be mailed and a phone number to call or text with the information.

While the ad is a humorous reminder to the general public that they can help clean up their neighborhoods by reporting illegal activity, it seems as if some drug dealers have taken the message to heart.  It has been reported that at least one alleged drug dealer has actually called his sheriff to report another in an apparent attempt to squeeze out his competition.