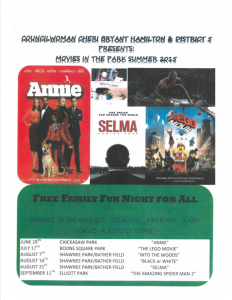 Did you ever wonder what the real story was behind some of those classic fairy tales you heard growing up? This Friday you will have a chance to learn the back story when “Into the Woods” is shown as the next District 5 “Free Friday Night Movies in the Park” at Shawnee Park on August 7th.

“We have a great feature lined up as the summer begins to wind down and with school starting next week, this film should be fun for everyone who grew up reading about fairy tales,” says Hamilton. “This is another great way to enjoy a Friday night in Shawnee Park.”

Here are the remaining Free Friday Night Movies in the Park lineup through August and September of this year:

“So when it’s movie night in our parks remember to bring a lawn chair, picnic basket and insect repellent and come join us for some fun,” says Hamilton.

The film begins at dusk at the Bather Sports Complex at Shawnee Park.

For more information about the District 5 “Free Friday Night Movies in the Park,” contact Councilwoman Hamilton’s office at 574-1105.