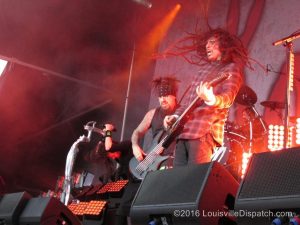 The two day long Louder Than Life music festival rocked heavy metal and rock fans from all over this past weekend with a jam-packed lineup of nearly 40 acts from around the world for the third annual celebration of bourbon, music, and gourmet man food.

Music fans made the journey to Louisville’s Champions Park in massive numbers despite the rain and chilly temperatures early on the first day.  Once inside the venue, they were treated to a series of unforgettable shows from their favorite artists – along with all the staples of a good music festival: food, booze, dancing, and band merch.

The three-dozen-plus bands shredded, pounded, screamed, and, yes, even bagpipe-ed for the electric crowds in front of the festival’s three stages.  Although the two main Monster Energy stages were side-by-side at one end, the third was located at the far opposite corner of the venue – good for not having bands drown each other out, bad for trekking back and forth.

As the performers thrilled festival goers, thousands of fans packed as far forward toward the stages in a closer-than-usually-socially-acceptable mass of humanity that smelled of unwashed campers, smoked turkey legs, smoked pork, and other, possibly illicit, smoked items.  Dancing, hugging, fist bumping, fist pumping, moshing, and getting knocked down only to be helped back up was the routine throughout the crowd. 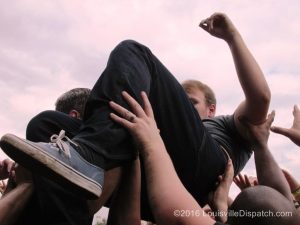 Despite the signs warning the faint of heart against the potential dangers, crowd surfing fans could be seen during nearly every performance.  This activity started off slow until, on day one of the festival, Michigan metalcore rockers I Prevail instructed everyone to make with the crowd surfing.  After this, the waves of surfers grew throughout the weekend until Sunday’s headline acts Korn, Disturbed, and Slipknot were greeted by an absolute sea of bodies skimming the surface of the crowd toward the stage where they were helped down and escorted back into the audience by the alert security staff.  The smaller venue at the Zorn stage – where bands like Clutch, Zakk Sabbath, Kyng, Being As An Ocean, and Bishop Gunn played – had minimal crowd surfing and only a small handful of mini-mosh pits.

Likely thanks to the easy going nature of rock fans, despite some of the crazy outfits, and the large presence of event security and LMPD officers, Louder Than Life attendees were on their best behavior.  I did see one possibly dehydrated, likely inebriated reveler being carted off by medical staff to be checked out.  The condition was apparently not serious enough that I didn’t spot him back out in the crowd later with a bandage on his arm – perhaps from an IV to help recover from the dehydration brought on by all-day dancing in the heat.

The few mosh pits that did pop up were friendly… for a mosh pit, and I only noticed one partier who over did it as he belligerently pushed his way through the crowd only to become intimately familiar with one of the park’s many trees and subsequently be wrestled out of the venue by police and medical staff.  I also spoke with one member of the stage security team who suffered from a twisted kneed on the first day as he slipped off of the rain-covered barricade separating the crowd from the security/photo pit at the front of the stage.  An Ace wrap and ice and he was back to work guarding the stage when I spoke with him on day two. 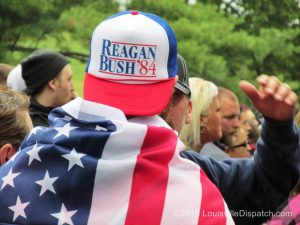 Despite the all-American atmosphere at the venue – including a patriotic, if not time-traveling, concert fan dressed in a Bush/Reagan ’84 hat and American flag cape – performers made their way to Louisville from around the globe.  Brit bands Cheap Trick and Young Guns were in the house, as were Swedish bands Sabbaton and Ghost.  Perhaps the award for Furthest Trip to Play at Louder Than Life might go to Australian band Twelve Foot Ninja, who even took the opportunity to announce the favorable outcome of their “footy” match to a perplexed audience.

Even though Louder Than Life is a huge event with extraordinary numbers of attendees, campers, and bands, the logistics were handled well after some lessons learned from previous years.  Vehicles were kept out of private property with the help of the provided signs and, although you might not have guessed, strict noise controls were in place to keep from disturbing neighbors.

Nonetheless, there were still a few hiccups, as the main stage microphone cut out during several performers’ sets, merch tents ran out of event t-shirts, and a few folks got a little antsy waiting to get out of the staff lot where we waited to exit for a little over an hour until all attendees had filtered out – likely a precaution for the pedestrians as there are no walkways along the roads in front of the venue.

Rock and heavy metal music fans would be hard pressed to find any better music event than the continuously improving, continuously evolving Louder Than Life festival in Louisville and fans are already getting excited for the 2017 show.  If you are making plans to attend, be sure to act quickly, since tickets are sold on a graduated price scale, increasing as event draws closer.

Check out some of the photos below from Louder Than Life 2016 and find more on our Facebook page.