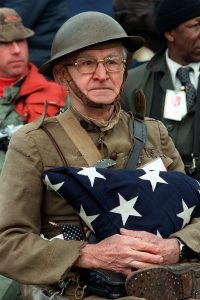 Joseph Ambrose, an 86-year-old World War I veteran, attends the dedication day parade for the Vietnam Veterans Memorial in 1982. He is holding the flag that covered the casket of his son, who was killed in the Korean War. Photo: Department of Defense.

11:00 AM, November 11, 1918 is the day that the Allied Powers signed a ceasefire with Germany to end World War I.  This marked the end of the fighting, but the signing of the Treaty of Versailles in June of 1919 marks the official end of the Great War. The United States joined the war effort well after the war had started. 53,402 American soldiers died in combat or were declared missing in action.  A total of close of 117,000 American soldiers died during the war effort from all causes and another 204,000 were wounded.  The large majority of the deaths were actually due to disease, including many from the infamous 1918 flu pandemic. In total, the world saw a loss of close to 11 million military personnel and 6 million civilians (this number does not include those who died as a result of the influenza pandemic).  This accounted for approximately 1.5% of the world’s population at the time (the 1918 influenza pandemic killed an additional 20 – 40 million people worldwide over the course of two years).

The following year, President Woodrow Wilson signed a proclamation that declared November 11, Armistice Day.  Wilson is quoted as saying, “To us in America, the reflections of armistice Day will be filled with solemn pride in the heroism of those who died in the country’s service and with gratitude for the victory, both because of the thing from which it has freed us and because of the opportunity it has given America to show her sympathy with peace and justice in the councils of the nations…”.  The original celebration started with two minutes of silence (or suspension of business) at 11:00 AM and was followed with parades and other public displays.

The holiday gained more attention in 1921, when on Armistice Day, President Harding presided over the funeral of a World War I serviceman who had died overseas, but remained unidentified.  The casket was shipped from France to Arlington Cemetery.  This is now commonly known as the Tomb of the Unknowns.  To show the importance of this ceremony, it was also attended by two other living Presidents: Taft and Wilson.  This was the first public ceremony in the nation’s history that was attended by three Presidents.  Finally, in 1938, Congress approved an Act that made November 11 an official holiday and was dedicated to remembering those who served in the war and to promote world peace.

In 1954, following World War II and the Korean War, Congress amended the 1938 Act and declared November 11 to be Veterans Day.  President Dwight D. Eisenhower issued the very first Veterans Day Proclamation: “On that day, let us solemnly remember the sacrifices of all those who fought so valiantly, on the seas, in the air, and on foreign shores, to preserve our heritage of freedom, and let us reconsecrate ourselves to the task of promoting an enduring peace so that their efforts shall not have been in vain.”  World War II saw 405,399 American soldiers die and close to 671,000 injured.  This is a small portion of the estimated 21-26 million soldiers world-wide who died.  As with any war, there were also massive civilian causalities during World War II: an estimated 60 – 65 million people died world-wide as a result of this conflict (approximately 3% of the world’s population).  World War II is still the deadliest conflict in the world’s history.  The Korean War started only five years after the end of World War II and American’s saw another 55,000 soldiers die and another 103,000 injured.

In 1968, the Uniforms Holiday Bill passed and Veterans Day was moved to the fourth Monday in October, essentially to ensure that federal employees would have a three day weekend for the federal holiday.  The new date was first observed in 1971.  Since holidays are technically left to the states to recognize, many states continued to observe Veterans Day on November 11.  This was a short-lived change, and President Ford signed a law in 1975 to change the date back to November 11, starting in 1978.  In 2001, Congress passed a resolution making the week of Veterans Day, a week long celebration. It has been celebrated as a week-long event since then, with a focused effort to help school children understand the importance of veterans.  This is not a holiday that is unique to the US either.  Many countries have a day to celebrate and honor their veterans, such as:  England, Canada, France, Belgium, New Zealand, Australia, Serbia, Netherlands, Norway, Italy and Denmark.  England, France, Belgium and Canada celebrate on November 11 as well, in honor of Armistice Day.

As with Memorial Day, Veterans Day is a day to remember the deceased who died fighting for our country and our freedoms, but it is meant more to honor the living who served this country.  Those that chose to fight for the freedoms we enjoy here and in many cases, to fight for people in other countries who need help. Not including the current Global War on Terror, close to 42 million American men and women have served in the armed forces.  Of these, more than 40 million are living (the oldest of which, served in World War II).  If we add in the veterans from the Global War on Terror, there are a total of approximately 44 million living veterans.  This means that veterans account for about 14% of the entire US population.  To put this number into perspective: the population of California, the most populous state in our union, is around 39 million.  While you’re thinking about what selfie that you want to post or what tweet to send out, remember why you are able to post those selfies and tweets for everyone to see.  Take a moment to ask yourself, would you be: willing to fight for your right to free speech, willing to fight for your right to worship in the way you choose, willing to fight for your right to vote on election day, willing to fight for others to be able to do the same?  Whatever your answer to those questions may be, know that the men and women in uniform fight for your rights and freedoms daily.  When you see a veteran, not just on Veterans Day, take a moment to thank him or her for their service.