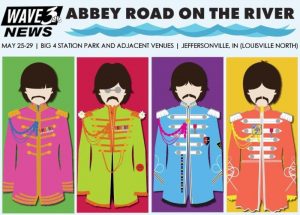 91.9 WFPK Independent Louisville is teaming up with the WAVE 3 News Abbey Road on the River to give music fans a reason to say YEAH, YEAH, YEAH on opening day of the festival. WAVE 3 News Abbey Road on the River will present the “WFPK Kick Off Concert starring Jake Clemons from Bruce Springsteen and the E Street Band” on Thursday, May 25th at 8:30pm. The free, ticketless event will be held at the Big Four Station Park in Jeffersonville, IN – the new home of the world famous Beatles tribute festival. Attendees will also be able to enjoy live Beatles music on other festival stages, a Beatles merchandise marketplace, and on-site food and beverage.

Jake Clemons is best known for being the nephew of the legendary Clarence Clemons and his replacement as lead saxophonist in Bruce Springsteen’s E Street Band. He’s been touring with The Boss, playing all the big dates, since 2012. Jake has been bringing his original music to audiences since 2010, but he’s really begun making a name for himself as a solo artist with the release of his highly anticipated 11-song first album “Fear & Love,” which was released in January. He plays guitar, sax, piano, and drums, he writes music, he sings, and he loves rock ‘n roll.

Reflecting on the album and first single Jake says: “Fear & Love is a journey that forges through loss & hardship and attempts to reconcile those challenges until finding its way to the freedom of being vulnerable and honest, mostly with yourself. The first single ‘A Little Bit Sweet,’ sits just on the other side of those losses, recognizing that yes, life is bittersweet…but a little bit sweet makes it better.”

In addition to the free kick off concert on May 25th, Clemons will also perform at the festival on Sunday, May 28th. After 12 years in Louisville, the WAVE 3 News Abbey Road on the River will debut in Jeffersonville at the Big Four Station Park on Memorial Day weekend, May 25-29. 2017 marks a number of musical anniversaries including the 50th anniversary of the Summer of Love and the 50th anniversary of the release of the greatest album in rock history – Sgt. Pepper’s Lonely Hearts Club Band. The lineup of popular musicians from that 1967 summer who will perform at this year’s festival include Herman’s Hermits starring Peter Noone, Grammy-winner Peter Asher of Peter and Gordon, American rock band The Grass Roots, The Family Stone, Mark Lindsay of Paul Revere and the Raiders, American rock band Ambrosia and former Wings band members Laurence Juber (guitarist) and Steve Holley (drummer).

For more information and to purchase tickets, visit www.arotr.com.

One Response to 91.9 WFPK and Abbey Road on the River Partner to Present Free Kick Off Concert Starring Jake Clemons