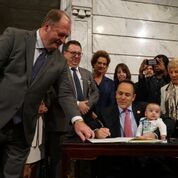 Gov. Bevin commemorated the recently enacted Senate Bill 5 and House Bill 2, which both passed with broad bipartisan support in the first week of this year’s General Assembly.

He applauded legislators for their unwavering commitment to protect the most vulnerable members of society and noted that despite political controversy, “the sanctity of human life is worth fighting for.”

“We have a chance to lead this nation from a moral and spiritual perspective that is desperately needed,” said Gov. Bevin. “We must continue to fight this scourge that is the taking of innocent life. It’s worth it, America is worth it, and Kentucky is going to lead the way.”

Senate Bill 5 prohibits physicians from terminating pregnancies after 20 weeks of gestation—a timeframe in which experts say that a fetus can feel pain. House Bill 2 requires physicians to offer an ultrasound to patients prior to performing an abortion, allowing women to make a truly informed medical decision. (Patients may choose not to have the ultrasound by signing a form to opt out.)

“Kentucky citizens elected the members of the General Assembly to pass responsible legislation that falls in line with Kentucky values,” said Senate President Robert Stivers. “Senate Bill 5, along with House Bill 2, protects the integrity and intrinsic value of human life. It is our duty as elected leaders to protect our most vulnerable, and we have made steps towards accomplishing that goal by passing this momentous legislation.”

“Studies have shown over and over that unborn children at 20 weeks of gestation are sensitive to pain,” said Sen. Brandon Smith, primary sponsor of Senate Bill 5. “The Pain Capable Unborn Child Act offers one more protection to those who cannot protect themselves. Kentuckians value the sanctity of life, and I am proud that we in the Kentucky Senate are committed to safeguarding the lives of all our citizens.”

“This session, common sense legislation to protect life and provide women with appropriate medical information has passed the Kentucky General Assembly,” said Rep. Addia Wuchner, chair of the House Health and Family Services Committee. “Just like our passage of an informed consent bill last session, this bill demonstrates a further commitment from the House to providing women with all of the medical information available before undergoing an abortion.”

Since taking office, Gov. Bevin has signed three important pieces of pro-life legislation into law. In addition to this year’s measures, he signed Senate Bill 4 (“informed consent”) in 2016, requiring medical personnel to provide face-to-face consultation to women 24 hours before an abortion is performed.