Louisville Metro Government has agreed in principle to a settlement that would significantly reduce a proposed utility rate increase by Louisville Gas & Electric (LG&E).

Wednesday’s settlement agreement is more than $40 million below LG&E’s initial request for new revenue and includes a drastic reduction in LG&E’s proposed fixed monthly charges of $46 for residential customers who have both electric and gas service. The settlement requires the approval of the Kentucky Public Service Commission (PSC) and could be altered following the PSC’s hearing on the case that begins May 9.

“This settlement protects LG&E customers of all types but also supports the utility in providing safe and reliable service for its users,” said Mayor Greg Fischer. “Louisville Metro’s efforts in this case benefit all cities within Jefferson County and the rest of the LG&E service area.”

Jefferson County Attorney Mike O’Connell, in his authority as legal representative for Louisville Metro Government, has personally represented the city in the case, including settlement negotiations last week in Frankfort.

“Our work to limit the increase on fixed charges and to the rates cities pay for street lights is a big win for everyone in Jefferson County,” said O’Connell. “Listening to the input of our citizens, the Mayor and other city officials, along with members of Metro Council, guided me throughout this case. I hope that the PSC views this stipulation as fair, just and reasonable and ultimately approves it.”

LG&E asked the PSC in November to grant an increase to its electric and gas rates that would boost the company’s annual revenues by $107.5 million. Louisville Metro Government intervened in the case on December 2 and has since presented facts and expert testimony that called for a substantial cut to LG&E’s request. The settlement represents a 38 percent reduction from what LG&E requested in additional revenue.

Louisville Metro’s intervention paid especially high dividends in the debate over the fixed electric service charge. LG&E proposed to more than double the current service charge of $10.75 to $22 per meter. This increase raised concerns about impacts on low-income families, seniors and others living on fixed income, and from those in Louisville who had invested in energy conservation efforts, including solar technology. The high level of proposed increases in fixed charges was a significant factor in Louisville Metro’s decision to intervene. 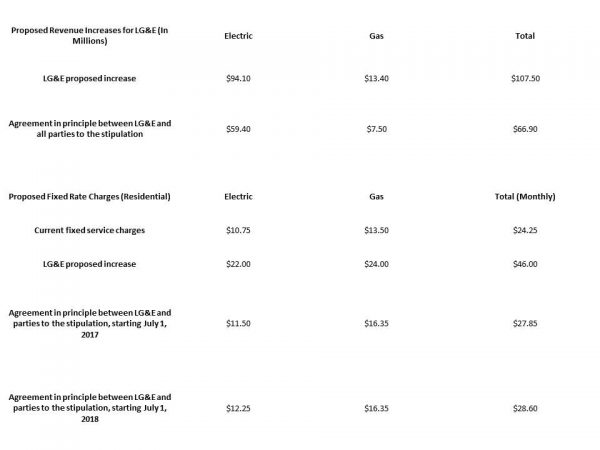 When the fixed gas service charge is also taken into account, Wednesday’s agreement includes combined monthly charges of $27.85 for residential customers starting July 1, 2017. This combined $3.60 increase from current charges is drastically lower than LG&E’s request for an immediate $21.75 monthly boost in fixed costs outside of monthly electric and gas use.

This is the city’s first significant intervention in a LG&E rate case heard before the PSC in more than 30 years. Of the Louisville Metro Council members present and voting on Dec. 15, they unanimously approved (20-0) a resolution in support of intervention. Councilmen Bill Hollander and Kevin Kramer both have offered written testimony in the case.

Other notable pieces of the settlement include:

Parties to the settlement include LG&E, Louisville Metro, the office of Attorney General Andy Beshear and numerous other intervenors in the case, including large-scale commercial and industrial customers and nonprofits like the Metropolitan Housing Coalition and the Sierra Club.

“The outcome of the rate case for residential customers in Louisville Metro is much improved over what had been requested,” said Tom FitzGerald of the Kentucky Resources Council, which represented the Metropolitan Housing Coalition. “Louisville Metro and County Attorney Mike O’Connell worked with the other intervenors and were instrumental in keeping customer charge increases small, and in helping to expand low-income energy assistance for the most vulnerable LG&E customers. We appreciate LG&E’s continued commitment to low-income assistance, which they pledged to increase and continue through 2021.”

This is a partial settlement as intervenors AT&T Kentucky and the Kentucky Cable Telecommunications are not parties to the agreement.

Attorney Gregory Dutton from the law firm of Goldberg Simpson has served as outside co-counsel for Louisville Metro on this case.

A full version of the stipulation can be found here.