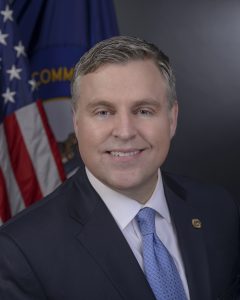 Secretary Tilley, who has helped spearhead efforts in Kentucky to improve reentry, was among a group of national and state corrections experts who met last week with members of President Trump’s Domestic Policy Council and the White House’s Intergovernmental Affairs team.

The group discussed a range of issues, including the importance of reentry and the value of Congress’s Second Chance Act, the need to get business leaders’ insight on putting formerly incarcerated people to work, and more closely examining crime nationally and locally to understand the latest trends.

This meeting came on the heels of President Trump’s creation of the White House Office of American Innovation, which will use business models to help inform improvements in the operation of government.

Secretary Tilley noted the insight that can be gained from the business community when tackling the challenges formerly incarcerated people face during reentry.

“Ask any person in prison to name the most important thing they need to succeed in the community upon their release. The response will almost always be the same: ‘I need a job,’” Secretary Tilley said. “I’ve been working in criminal justice for 25 years and I’ve never seen the business community this engaged in these issues. With those leaders at the table, we can better understand the opportunities and challenges associated with hiring a person with a criminal record.”

“The Trump administration has made their commitment to public safety clear, and we met to discuss how the good work of corrections officials to reduce recidivism and improve public safety can be a key part of that equation.” said Kempf. “Corrections administrators collectively oversee more than 400,000 staff members and supervise more than 8 million people. The impact we can make is enormous, and following a very productive meeting with the White House, we’re excited about the next steps.”

In Kentucky, Secretary Tilley is chairman of a state panel – the Criminal Justice Policy Assessment Council – which has studied data-driven evidence and recommended reforms for a smarter and stronger system of justice. Appointed by Gov. Matt Bevin, the council’s work has resulted in Senate Bill 120, a measure to reduce recidivism and improve public safety with more effective reentry.

“Almost everyone with a criminal record will eventually return to society. Our communities are safest when we provide these individuals a clear path toward employment and demand that they take personal responsibility for holding a job and turning away from crime,” Secretary Tilley said. “The council’s work has been critical in meeting these goals, and I want to thank Gov. Bevin for his leadership in these efforts.”

This week’s meeting also came shortly after the U.S. Department of Justice announced the formation of Crime Reduction and Public Safety Task Force, which will be charged with developing strategies to reduce crime and improve public safety. All the corrections leaders agreed that thoughtful approaches to reducing recidivism will be an important part to ensuring those the efforts of the task force prove successful.