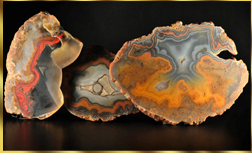 The Kentucky Artisan Center at Berea has a new exhibit featuring the Kentucky agate, a stone rarer than diamonds, in “Agate: Jewel of Kentucky” on display in the Center’s lobby through Nov. 11, 2017.

This exhibit tells about the history, formation and location of these fascinating and rare works of nature. Informational panels and over 30 agate specimens, as well as finished jewelry by numerous Kentucky artists, round out this exciting exhibit.

Kentucky agates come in a wide range of colors. Usually banded in layers or stripes, some varieties have ‘eye’ markings, or specks of color, some have fossilized inclusions, and others are solid. Called the ‘earth rainbow’ the concentric bands that form in agates come in nearly every color the earth can produce, including a colorless form.

This exhibit also explains various lapidary and jewelry techniques for turning this rare stone into elegant jewelry. All agate specimens, polished cabochons and finished jewelry are for sale as well as the book “Kentucky Agate: State Rock and Mineral Treasure of the Commonwealth” by Roland L.  McIntosh and Warren H. Anderson.

The Kentucky Artisan Center at Berea is located at 200 Artisan Way, just off Interstate 75 at Berea Exit 77. The center’s exhibits, shopping and travel information areas are open daily, year-round, from 9 a.m. to 6 p.m., and the cafe is open from 9 a.m. to 4 p.m. Admission is free.

The Center currently features works by more than 750 artisans from more than 100 counties across the Commonwealth. For more information about events call 859-985-5448, or go to the Center’s website, or Facebook page.