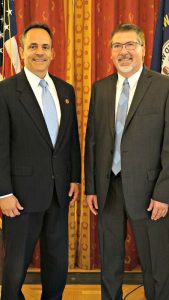 Gov. Matt Bevin and Justice Secretary John Tilley announced today that Damon Preston has been appointed as Kentucky’s next Public Advocate, continuing his decades of steadfast work at the Department of Public Advocacy (DPA) on behalf of indigent clients.

“As a career public defender, I am thrilled to be entrusted with the position of Kentucky’s Public Advocate,” Preston said. “I have been blessed to work under the strong leadership of past advocates Ed Monahan and Ernie Lewis and intend to continue their tradition of faithfully upholding the Sixth Amendment right to counsel in the Commonwealth. My goal is to improve our statewide system, which already provides excellent representation to indigent clients in the criminal courts of Kentucky.”

The Department of Public Advocacy provides legal representation to low-income clients accused of crimes, fulfilling their constitutional rights to an attorney and to a fair trial. Each year, DPA attorneys, investigators, mitigation specialists, alternative sentencing workers and administrative specialists handle more than 140,000 trial and post-trial cases statewide. These include involuntary commitments, juvenile cases, misdemeanors and felonies.

“Damon is a proven leader who commands with a steady hand, and he has played an instrumental role in every aspect of DPA over the past two decades,” Secretary Tilley said. “We value his data-driven approach and eye toward accountability and look forward to his continued service at the department. We also thank Ed Monahan for his unyielding service and sacrifice on behalf of DPA and its clients. He has provided a great deal of resolute leadership during tough budgetary times, and his work has impacted many lives for the better.”

In addition to work at DPA, Preston serves on the board of the Kentucky Association of Criminal Defense Lawyers and is a past chair of the Criminal Law Section of the Kentucky Bar Association. He is married with two daughters and lives in Georgetown.