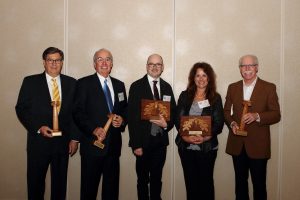 Council President Bob King said, “This year’s honorees are truly exceptional, and we are delighted to honor them for their many contributions to enrich the lives of our students and campus communities.”

The OAK award honors outstanding graduates for achieving statewide or national recognition in their careers and for exhibiting a lifelong affection for their alma mater and to Kentucky. Recipients include:

Recipients were nominated by their university or college president.

The OAK award was first presented in 1987 and the Acorn award was begun in 1992.

Matthew Winslow, of Lexington, is a professor for Eastern Kentucky University’s Department for Psychology. Winslow holds a Bachelor of Arts from Macalester College in Minnesota, a Master of Arts from the University of California-Santa Cruz and a doctorate from the University of Minnesota. In addition to teaching several undergraduate statistics/research methods courses and multiple sections of social psychology, he has taught several seminars and special topics courses, and serves as research mentor to undergraduate and Honor’s Program students. Winslow was named the Psychology Department’s Advisor of the Year, and is currently serving as chair of the faculty senate.

Stacy Taylor, of Louisville, is an associate professor and the department head of English at the downtown campus of Jefferson Community and Technical College. She holds a Bachelor of Arts in English and Master of Arts in Literature in English, as well as is working on her doctorate in rhetoric and composition, from the University of Louisville. She teaches several English composition courses, as well as humanities courses, and serves on Jefferson Community and Technical College’s General Education faculty. She serves as the co-chair of the Faculty Council, on several Achieve the Dream committees, the Kentucky Association for Developmental Education Executive Board, and chairs the system-wide curriculum committee for English.

David Beck, of Louisville, holds a Bachelor of Science in agriculture from Murray State University. He currently serves as executive vice president and chief executive officer of the Kentucky Farm Bureau Federation. Beck is active in both state and national agricultural organizations, including the Future Farmers of America National Convention Host Committee, Kentucky 4-H Foundation, Kentucky Agricultural Council and Kentucky Fair Council. Beck also assists in recruitment and student initiatives for the Hutson School of Agriculture at Murray State University. He was named Outstanding Agriculture Alumnus, as well as Distinguished Alumnus, of the university.

Michael Mountjoy, of Louisville, holds a Bachelor of Accounting from the University of Kentucky. He is the founding member of Mountjoy, Chilton and Medley, LLP, CPAs and Advisors, the largest Kentucky-based accounting firm. Mountjoy serves on numerous professional and community associations, including University of Kentucky fellow, honorary board of trustee member for the University of the Cumberlands, chair of the Gheens Foundation, Inc., and past president of the Kentucky Society of Certified Public Accountants. Mountjoy was named one of CPA Magazine’s “Top 100 Most Influential CPA’s” and Louisville Magazine’s “50 Most Powerful People in Louisville.”