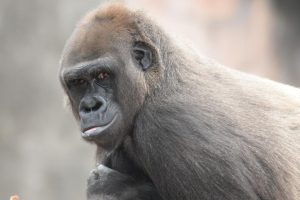 Earlier this summer, the Louisville Zoo received a male silverback gorilla (Casey) from the Audubon Zoo in New Orleans. This week a second gorilla from Audubon Zoo arrived safely in Louisville. Bandia, a 20-year-old western lowland gorilla, will join Gorilla Forest after a standard quarantine period followed by acclimation time. Both moves were part of a planned collaborative effort across several accredited zoos within the Association of Zoos and Aquariums (AZA).

Ultimately, the plan is that new silverback Casey will become the patriarch in a family group that includes one-year-old Kindi, surrogate mother Kweli, and female gorillas Paki and Bandia. In conjunction with these changes, the Louisville Zoo’s 29-year-old silverback Mshindi was moved to the Cincinnati Zoo.

“We believe this was the right time for these changes to occur. Creating the strongest and healthiest family group for Kindi is one of our primary priorities,” said Assistant Mammal Curator and Gorilla Forest Supervisor Jill Katka. “With the death of her natural mother Mia Moja last year, the family group of Paki, Kweli and Mshindi had been impacted and the dynamics altered. Our hope is that these new changes will allow Kindi to have a cohesive family group and will help create more viable family groups for the health and stability of all the gorillas involved in these moves coordinated by the AZA’s Species Survival Plan (SSP).”

The SSP serves as a safeguard for animals facing extinction in the wild. This highly coordinated partnership between AZA-accredited zoos is designed to facilitate a healthy and genetically-diverse population of gorillas in managed care. Through analysis of data from conservationists around the world, the experts at AZA determine which species are most at risk in the wild and can be best helped through breeding programs in AZA zoos. A Species Survival Plan is then created for each of these species. By transferring animals as a part of this plan, zoos maintain the diversity of a threatened species’ gene pool and ensure the best chances of healthy offspring so that the species may continue to survive.

Western lowland gorillas are considered critically endangered with an estimated 100,000 left in the remnant wild. There are about 350 residing in 48 AZA-accredited institutions in North America. Due to habitat destruction primarily caused by mining, logging and agricultural expansion, gorilla numbers continue to decline. Coltan mining in particular is impacting the gorilla population. Coltan is a black metallic mineral that is used in nearly every electronic device today including cell phones. The Louisville Zoo partners with Louisville-based organization Eco-Cell to collect old cell phones and help reduce the need for additional mining in and around gorilla habitats. The bushmeat trade and the Ebola virus are also major threats. Our conservation partners include The Dian Fossey Gorilla Fund International which works to protect and study gorillas and help local communities build their conservation capabilities and PASA (Pan African Sanctuary Alliance) is the largest association of wildlife centers in African helping to secure a future for Africa’s primates and their habitat.