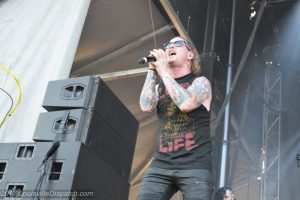 Fans of all genres of rock, from 80’s-style glam-rock to speed metal, packed Lousville’s Champions Park, as they have since the Louder Than Life started in 2014.

Across the two day event, three dozen bands played three stages to a mass of tens of thousands of fist-pumping, crowd-surfing, mosh-pitting concert goers.  While main stage acts like Ozzy Osbourne, Rob Zombie, Five Finger Death Punch, Incubus, Stone Sour, and supergroup Prophets of Rage drew the largest crowd, the performers kept the excitement going from the opening show just after noon each day well into the night until the final curtain.

The opening-day first chords were struck on one of the two main stages by New Jersey hardcore act, Palisades and, shortly after, the other end of the 200+ acre venue on the Zorn Stage by He Is Legend.  The shows continued throughout Saturday with more acts including DED, Of Mice and Men, Steel Panther, Five Finger Death Punch, Mastodon, Rob Zombie, and Eagles of Death Metal (EODM) – who gained unfortunate notoriety when, in 2015, terrorists attacked the Bataclan Theater in Paris while the band was on stage. 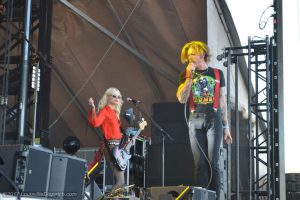 On moving on, EODM bassist Matt McJunkins told a CNN reporter shortly after the attack, “music is what we do, it’s our lives, and there’s no way we’re not going to keep doing it.”  And “keep doing it” they did, as they rocked a packed Loudmouth Stage crowd during their set.

The show continued Saturday through Ozzy Osbourne’s closing act, during which apologized to the crowd several times as his voice cracked and went off-pitch.  Voice issues are nothing new for The Godfather of Heavy Metal; in a 2007 interview, the Prince of Darkness told the News Tribune “I get a lot of voice problems. You have to do a lot of shouting, you know. […] I had a little bit of voice trouble. But it seems to be getting better now, you know.“

Last year, Ozzy opened up to Kerrang! magazine that the one thing he fears is losing his voice, saying that, unlike a guitar player who could simply get another instrument, singers only get one voice.  During face-melting guitar solos by Zakk Wylde and an unbelievable, extended drum solo by Tommy Clufetos, Ozzy sipped tea, chewed gum and popped lozenges, eventually gaining back his voice and putting on a fantastic show. 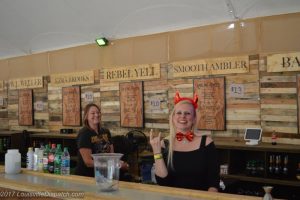 Despite being a massive music festival, heavy tunes and head-banging is not all that the event offers, as indicated by the other two-thirds of Louder Than Life’s of Music, Whiskey, and Grub.

Stretched between the Monster and Loudmouth Stages at one end and Zorn Stage at the opposite end, Champions Park was lined with a variety of vendors, displays, and attractions – everything from purveyors of booze and greasy fried festival food to swag merchants and USMC recruiting opportunities.  Everything looked and smelled good, although our editors can personally vouch for Rock n Roll BBQ as the perfect fuel for hungry festival goers.

Often accompanying what can easily turn into an all-day drinking contest in the hot sun are rowdy types.  However, out of control ne’er-do-wells have been absent from the Louder Than Life events that we have witnessed.  LMPD officers are on hand to help reign in unruly behavior, but they appeared to be able to spend the vast majority of their time handling access control and taking in the music and people watching rather than dealing with rowdy types. 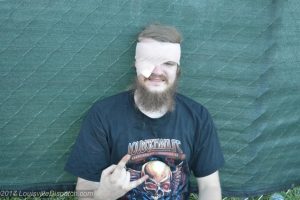 EMTs are also on hand; thankfully they mainly work to keep people hydrated and patch up minor scrapes rather than dealing with any real injuries – which might come as a surprise to outsiders watching what might otherwise appear as a violent scene inside a mosh pit.  A number of festival attendees were making their way around the event in wheelchairs, but – as best as we could tell – they arrived thusly equipped… several of them even participating in the crowd surfing, chair and all.  The mosh pits, though few and far between given the heavy nature of the on-stage performances, were fast paced yet respectful for participants, who came away mostly unscathed.

One exception was Nick, who, during Stone Sour’s Sunday set, caught an inadvertent elbow to his sunglasses and got a cut over his eye.  Though winded, Nick was in good spirits and both he and his friend described the situation as “pretty metal!“

The high-energy show continued Sunday, kicked off by Black Map and Louder Than Life alums, ’68.  The day continued with acts including Falling in Reverse, Greta Van Fleet, and Palaye Royale. 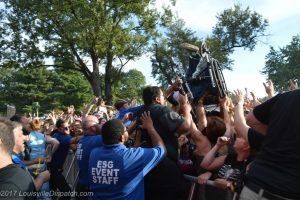 If the atmosphere during the rest of the event could be described as electric, Sunday night’s main stage performances ratcheted things up to another level of high voltage.

Chicago’s hardcore Rise Against ignited the crowed with a high-speed set that incited an ocean of crowd surfers that only swelled more once lead singer Tim McIlrath descended from the stage to mount the stage barrier and greet fans lucky enough to surf his way as he belted out lyrics.

Sunday’s energy continued as Corey Taylor, returning after his 2017 Louder Than Life headline performance with Slipknot, led Stone Sour through blistering vocals and heavy drum and guitar backing while dousing the front rows of the moshing crowd with bottled water.

The slowdown did not last long, however, as the weekend-long festival wrapped up on a high note with rap-rock supergroup, Prophets of Rage – comprised of Rage Against the Machine and Audioslave‘s Tom Morello, Tim Commerford, and Brad Wilk; Public Enemy‘s Chuck D and DJ Lord; and Cypress Hill‘s B-Real. 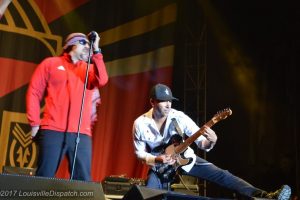 Pumping fists in the sky, the crowd – who likely sang as much of the songs as those on stage – took the performers’ lyrical advice to get out their seats and jump around to heart and stayed mobile throughout the show.

During their set, the band performed a somber Like a Stone tribute to fellow Audioslave member and former Soundgarden frontman, Chris Cornell – who died earlier this year in May – amidst a sea of cell phone lights and lighter flames before continuing their high-energy set through their final performance, Killing in the Name.

Rock and metal fans were treated to an outstanding weekend of Louder Than Life’s trademark music, bourbon, and “gourmet man food,” and left the venue, as always, excited for the next iteration of the festival.  Fans are, no doubt, anxiously awaiting new of what the five-year anniversary of the event holds in store.

Check out more photos from Louder Than Life 2017 below and on our Facebook gallery.