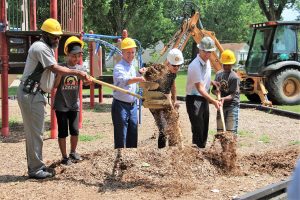 Joey Logano joined executives from the Kentucky Speedway, along with Louisville Mayor Greg Fischer, and other partner guests to break ground on a new activity center in the city’s Portland Park. Logano’s visit comes three weeks ahead of the Monster Energy NASCAR Cup Series, Quaker State 400 at the Sparta, K.Y. speedway.

Logano, a 19-time winner at NASCAR’s top-level, tasked the Kentucky Speedway to identify a community in-need where a positive impact could be made during his stop to promote the Quaker State 400. Through the process, Portland Park was selected, and with financial support from the Joey Logano Foundation, Coca-Cola Bottling Co. Consolidated, Shell Oil Company, PNC Bank, Louisville Parks and Recreation and GameTime Playgrounds, Logano’s desire for community improvement moved closer to a reality.

“When I heard about the Kentucky trip to promote the Quaker State 400, I knew I wanted to do something more than just make media appearances,” said Logano. “I’ve been a firm believer that as a NASCAR driver and as a sport, we have an amazing platform to make positive impacts for individuals and communities across the country. I’m thankful that through the fans who support the Joey Logano Foundation, Shell Oil Company and Coca-Cola who support the foundation in addition to our racing efforts.“

“We’ve been able to have a few special memories through our foundation at Kentucky Speedway in the past.  In 2016, we hosted Ashleigh Hunt, who’d been diagnosed with Osteosarcoma and her family at the track. Despite battling against a painful cancer, Ashleigh never quit smiling. She had such a positive impact on everyone she met and left a lasting impression everywhere she went. Unfortunately, we lost Ashleigh earlier this year, but her memory will live on at Portland Park as we’re dedicating the center to her memory.”

The activity center will be a STEM based system, incorporating the elements of science, technology, engineering and mathematics throughout the playground. The groundbreaking ceremony took place at 12 pm at Portland Park on Tuesday, June 19th. The project is scheduled to be completed the week of the Quaker State 400 weekend at Kentucky Speedway. A separate ribbon cutting ceremony will take place to officially open the new activity center.