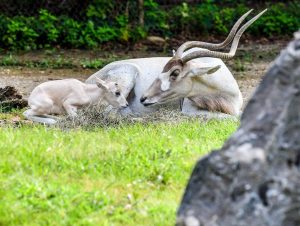 The Louisville Zoo welcomed a male Saharan addax calf born early morning Sunday, August 19. The mother is Patella and the father is Laird. The calf weighs a little over 18 lbs. This is the 59th calf born here at the Zoo. Addax have been a part of the Zoo since it opened in 1969.

The International Union for Conservation of Nature cites the Saharan addax as critically endangered. In 2016, field researchers estimated that less than 100 individuals remain in the remnant wild.

The addax is found in arid regions of Africa, within isolated pockets of the Sahara desert. They live in small groups of five to 15 animals that are led by a mature male.

The new Louisville Zoo calf will join the other addax on exhibit daily in the yard located near the bongo and elephant exhibits in the African zone.

A name will be announced in the coming weeks.

This addax birth was planned and is a part of the Association of Zoos and Aquariums (AZA) Species Survival Plan (SSP). Breeding plans work to maintain the genetic diversity of managed animal populations.