September 20th Test Will Appear as an Actual Emergency Message 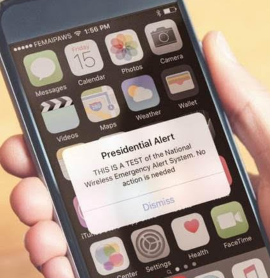 Many of us are used to the required weekly and monthly test alerts that periodically interrupt broadcast radio and television programming with those jarring tones.  Do not be alarmed when a similar system test is conducted one week from today, although on a much larger scale, coordinated by the Federal Emergency Management Agency (FEMA) in conjunction with the Federal Communications Commission (FCC).

On September 20, 2018, FEMA and FCC will conduct a nationwide test of the Integrated Public Alert and Warning System, known as IPAWS.

Although this test will interrupt radio and television programming like the regular Emergency Alert System (EAS) tests, the messages will be delivered to broadcasters through next-generation alerting infrastructure rather than over the airwaves. Because this exercise make use of that new alerting technology, the alert will also trigger notifications on Wireless Emergency Alert (WEA) compatible cell phones.

The widespread national test is intended to help both alert providers as well as recipients ensure that the system functions normally from end to end so that important information can be received in a timely fashion in the event of an actual emergency.

The WEA test message will be sent to cell phones that are connected to wireless providers participating in WEA. This is the fourth EAS nationwide test and the first national WEA test. Previous EAS national tests were conducted in September 2011, 2016 and 2017 in collaboration with the FCC, broadcasters, and emergency management officials in recognition of FEMA’s National Preparedness Month.

“The tests that you usually hear are typically a part of the over-the-air broadcast EAS and NOAA Weather Radio systems,” a representative of alerting equipment manufacturer, Gorman-Redlich, told Louisville Dispatch. “Those tests tend to be for a relatively small geographic area and affect only broadcast outlets. This time, the test targets a nationwide audience, with alerts being sent to all broadcasters at once by internet and satellite signals and to individual cell phones by their carriers.”

The message heard on radios and televisions during this nationwide test will be similar to regular monthly EAS test messages with which the public is familiar and will include a reference to the WEA test:

“THIS IS A TEST of the National Emergency Alert System. This system was developed by broadcast and cable operators in voluntary cooperation with the Federal Emergency Management Agency, the Federal Communications Commission, and local authorities to keep you informed in the event of an emergency. If this had been an actual emergency an official message would have followed the tone alert you heard at the start of this message. A similar wireless emergency alert test message has been sent to all cell phones nationwide. Some cell phones will receive the message; others will not. No action is required.”

Because this test uses a live event code, rather than a designated test code, the WEA test message will have a header that reads “Presidential Alert” and text that says:  “THIS IS A TEST of the National Wireless Emergency Alert System. No action is needed.”

The WEA system is used to warn the public about dangerous weather, missing children, and other critical situations through alerts on cell phones. The national test will use the same special tone and vibration as with all WEA messages (i.e. Tornado Warning, AMBER Alert). Although certain weather and AMBER alert messages may be turned off on cell phones, users cannot opt out of the WEA test since it uses the mandatory live-code Presidental Alert event type.

If circumstances, such as a major weather event, cause the IPAWS National Test to be postponed, the back-up date is Wednesday, October 3, 2018.