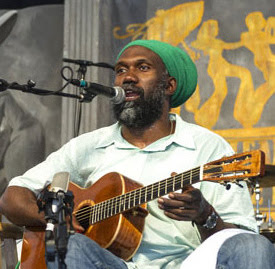 A spin-off of the Clifton Roots, Jazz, and Heritage Festival held at the Clifton Center last year, Butchertown Roots continues the quest to bring the best in roots, jazz, and world music to Louisville audiences. Featuring five Grammy nominees, a National Endowment for the Arts National Heritage Award recipient, and a MacArthur Foundation genius grant award winner, Butchertown Roots welcomes internationally renowned performers, as well as several of Louisville’s most celebrated local artists. Both concerts will be held at Louisville’s most exciting new venue, Odeon, located at 1335 Story Avenue in Louisville’s Butchertown neighborhood.

Masters of the infectious Brazilian music known as “Choro”, Trio Brasileiro, will kick off the festival on Saturday, September 15th at 8:00 pm. Recipients of a 2017 Grammy nomination for Best World Music Album for their recording with clarinetist Anat Cohen, Rosa dos Ventos, the Trio includes world-renowned guitarist Douglas Lora, mandolin virtuoso Dudu Maia, and percussionist Alexandre Lora, and is regarded as one of the world’s leading exponents of Choro, a musical style that has been described by some as a Brazilian cross between bluegrass and ragtime. With heart-wrenching harmonies and blazing virtuosity, Trio Brasileiro has brought crowds to their feet in concert tours throughout the U.S., South America, and Europe.

Butchertown Roots continues Sunday, September 16 with True Blues, an inspiring evening of music and conversation with legendary blues artists Corey Harris and Phil Wiggins. Harris, the phenomenal blues guitarist and singer who was a featured artist and narrator of Martin Scorcese’s 2003 documentary, “Feel Like Going Home”, which traced the evolution of the blues from West Africa to the southern U.S., will be joined by legendary blues harmonica virtuoso Phil Wiggins. Wiggins was recently awarded a National Heritage Fellowship by the National Endowment for the Arts in honor of his many accomplishments, which included a 32-year stint as a member of one of the most famous duos in blues history, Cephas & Wiggins.

Tickets
Tickets for the events are $22 in advance for a single day ticket to either concert ($25 at the door) or $40 in advance for the two-day pass ($45 at the door). Tickets may be purchased online through Louisville Tickets at louisvilletickets.com.

Outreach Program for Young People
In addition to the concert performances, blues artists Harris and Wiggins will conduct a free outreach workshop for young people on Sunday, September 16 at noon. The outreach program is made possible with support from AMPED, a free youth music program that provides a safe environment for Louisville’s young minds to explore their creativity through the power of music.