Chief Justice Minton To Give 2018 State Of The Judiciary Address 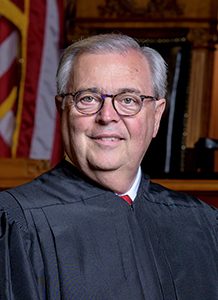 The University of Louisville Brandeis School of Law will host this year’s update on Judicial Branch operations when Chief Justice John D. Minton Jr. gives the State of the Judiciary Address on Friday, Nov. 2.

He will speak before the General Assembly’s Interim Joint Committee on Judiciary starting at 10 a.m. ET in the Cox Lounge of the U of L School of Law, 2301 S. 3rd St., Louisville. The event is open to the public and the media.

The 2018 State of the Judiciary Address will focus on how the court system is adapting to meet the changing needs of society. Chief Justice Minton will talk about the progress being made on the Civil Justice Reform Initiative, the Court Efficiency Committee, the 3DaysCount pretrial justice reform project, juvenile justice reform, the launch of eFiling for self-represented litigants and more.

The full address will be posted here shortly after the conclusion of his remarks.

The chief justice is the administrative head of the state court system and is responsible for overseeing its operation. Chief Justice Minton was elected to the Supreme Court in 2006. His fellow justices elected him to serve a third four-year term as chief justice in 2016. He is a member of the board of directors for the State Justice Institute, a federal nonprofit corporation that awards grants to improve the quality of justice in state courts. He is also a past president of the Conference of Chief Justices and past chair of the National Center for State Courts Board of Directors.