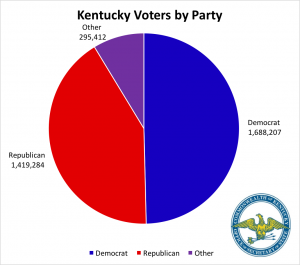 More than 3.4 million Kentuckians are registered to vote ahead of the General Election on Nov. 6, Secretary of State Alison Lundergan Grimes announced Thursday.

Democrats represent the plurality of the electorate with 1.68 million registered voters, or 49.6 percent of voters. Republicans total about 1.41 million, around 41.7 percent of voters, and more than 295,400 voters, about 8.68 percent, are registered with another party or as “Other.”

“We’ve made it easy to get registered to vote in Kentucky,” Grimes said. “At GoVoteKY.com, our one-stop voter portal, folks can register and make changes to their registration online. We’ve seen tens of thousands of Kentuckians getting registered to vote since the Primary Election. That’s only the first step, though. We want all registered Kentuckians to cast a vote in the General Election on Nov. 6.”

The final report of voters for the General Election shows a net increase of nearly 35,000 voters since the May 22 Primary Election.

Since the launch of GoVoteKY.com in 2016, more than 63,000 new voters have registered online to vote. Approximately 27,700 registered as Democrats, 23,500 as Republicans, and 12,200 as some other affiliation. More than 860,000 Kentuckians have visited the portal since it launched with about 200,000 coming since the Primary Election. Nearly 273,000 registration applications have been submitted and processed since 2016.

“This midterm election year in Kentucky is important. On the ballot, Kentuckians will have the opportunity to choose candidates for local offices all the way up to Congress. I join all our election officials – the State Board of Elections, county boards of elections, and our 15,000 precinct election officers – in calling on Kentuckians to go to the polls on Nov. 6.”

Complete registration statistics are available on the State Board of Elections website, elect.ky.gov.