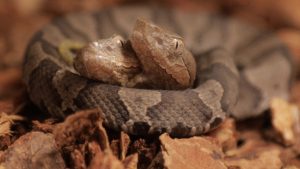 A two-headed copperhead snake born in the wild less than one month ago is now in the care of the Salato Wildlife Education Center and will be available for limited public viewing at the facility in Frankfort.

A Leslie County couple donated the rare snake for educational purposes after discovering it in their yard this month.

“I may encounter a two-headed snake in the wild every two or three years but a two-headed copperhead is a first for me,” said Kentucky Department of Fish and Wildlife Resources State Herpetologist John MacGregor, a leading expert on snakes in Kentucky. “It is a really interesting animal to have on display and a unique opportunity for the public.”

A two-headed copperhead snake is extremely rare and its life expectancy in the wild typically is short because of physical limitations caused by the mutation.

“One big question is if the throat connects to the rest of the intestinal tract,” MacGregor said. “That is sometimes a problem with two-headed animals; neither head is completely formed, and there is no way they can swallow anything. Sometimes one head works and the other head does not. With this snake, both tongues work, so there is a pretty good chance that both are functional.”

The snake’s well-being is a top priority for the Salato Center’s staff.

Public viewing times are subject to change and do not include the Salato Center’s annual Halloween Walk with the Animals event scheduled Saturday, Oct. 27. Viewing times on the day of that event have not been determined.

“Salato is thrilled to host this unique animal,” said Heather “Teach” Teachey, Salato Center director. “We hope the snake will thrive under our care and be an educational ambassador of a native Kentucky species.”

The Salato Center is open 9 a.m. to 5 p.m. Tuesday through Friday, and 10 a.m. until 5 p.m. on Saturday. It is closed on Sunday, Monday and state holidays. Admission is charged for visitors ages 5 and older. Visitors can confirm if the snake is available for viewing on the day of their visit by calling 1-800-858-1549.

The Salato Center will be closed for the winter after Nov. 21.