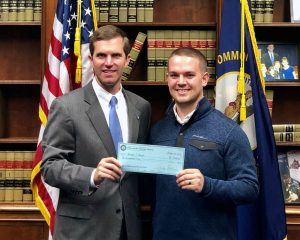 Nicholas T. Porritt, a second-year marriage and family therapy masters student at Asbury, won a competition hosted by Beshear to raise awareness of human trafficking by creating a logo for the task force.

Monday in Frankfort, Beshear presented Porritt with a grant-funded $1,000 scholarship and congratulated him for being selected to help Kentuckians better identify the work the task force is doing to combat human trafficking.

Beshear said Porritt’s undergraduate roommate, who runs a safe house in Malawi and helps victims of sex trafficking, served as inspiration for the design.

“I applaud Nicholas for his outstanding design that focuses on the positive reality of a life filled with hope, peace and freedom – a message that resonates with victims of human trafficking,” Beshear said. “Providing victims a way out is what drives us each day in the AG’s office. We are working with our law enforcement and community partners to arrest traffickers and help victims find hope.”

Porritt said he wants his art to help people find hope, much like how art has helped him find hope.

“I believe that all of the qualities of this logo will help those who are in this situation to see a symbol of what can be,” Porritt said. “It’s not a reflection of the struggle and pain they are in, but hope for where they will be and what they can expect of this trafficking task force.”

Porritt’s design uses a dove to symbolize freedom, peace and hope. The bird is made to look like green leaves to symbolize growth, endurance and nourishment. The olive branch symbolizes freedom as well as a place to find stability. The yellow background is symbolic of the sun and evokes growth and life.

In September, Beshear launched the logo initiative with state and local partners to help support the Statewide Human Trafficking Task Force, which Beshear’s office and Catholic Charities of Louisville co-chair.

All high school juniors and seniors, and all college students were invited to enter the competition. A random panel of members of the Kentucky Statewide Human Trafficking Task Force chose the winning logo. The panel included law enforcement, victim advocates and survivor leaders.

Beshear said human trafficking is the second-largest criminal enterprise in the world and the Office of the Attorney General is focused on raising awareness of the crime, helping victims and prosecuting traffickers.

Beshear’s Office of Child Abuse and Human Trafficking Prevention and Prosecution operates to assist victims, prosecutors and law enforcement across the state in identifying and responding to these cases and leads the efforts of the Statewide Human Trafficking Task Force.

The Office of Victims Advocacy provides direct advocacy services to victims of trafficking as they work to navigate the legal system and find healing and recovery from the trauma.

Beshear’s office and Catholic Charities of Louisville received a federal grant that has allowed the hiring of the state’s first full-time human trafficking investigator and training of more than 5,000 law enforcement officers, health care employees, first responders, inspectors and community members across the state.

Beshear’s office currently has 15 open human trafficking cases, and over the course of 2018, the office has been involved in 31 arrests or citations involving the crime. In February, the office secured a 20-year sentence against former Campbell County District Judge Timothy Nolan on numerous felony charges, including human trafficking of adults and minors.

Last month, Beshear joined Rep. Dennis Keene, of Wilder, to announce legislation that would grant the Office of the Attorney General the ability to investigate crimes, like human trafficking, throughout multiple jurisdictions in the state.