U of L Baseball Moves Forward in College World Series 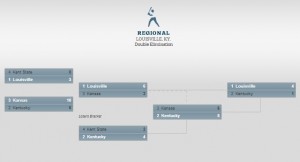 The Cardinals baseball team emerged unscathed from the first round of the NCAA College World Series this weekend’s double-elimination action that included a victory of the UK wildcats.

The Cards bested Kent State with a score of 5-0 as Kentucky fell to Kansas 10-6 in the first games.  UK came out of the losers bracket ahead of Kent State 4-2 while Louisville beat Kansas 6-3.  In their third game, the Wildcats edged out Kansas 8-6, leading to another in-state Kentucky NCAA tournament battle.

In the final game of the regionals, a game that was delayed almost four hours due to weather, the Cards beat the ‘Cats 4-1 as they earned three runs in the seventh inning from UK’s Sam Mahar after he replaced Logan Salow, who gave up only one run through his career-high 94 pitches in six innings.  The victory allows Louisville to move on to the best-of-three Super Regionals where they will face the winner of today’s noon game between Alabama and Kennesaw State. 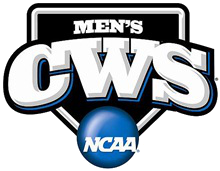 Between our Cincinnatti Reds-affiliated minor league Bats and our Louisville Slugger bats, Louisville is steeped in baseball.  Louisville’s love of baseball is what draws so many to the beautiful downtown Slugger Field, setting numerous attendance records and keeping the Bats among the highest attended minor league teams year after year.  Louisville is no slouch in the college sports arena either, with nearly 40 NCAA men’s basketball tournament appearances, 15 appearances by the women’s basketball team, and 18 bowl games for the football team.

Given this love of America’s Pastime and strong collegiate athletic background, it should be no surprise that Louisville will be one of 16 regional hosts for the 68th annual 2014 NCAA Division I Baseball Tournament as teams compete for a trip to Omaha for the College World Series.  This marks the fifth time that Louisville will host the games, making them a relative newcomer compared to institutions like Florida State, Miami (FL) and LSU, who have hosted 31, 24 and 22 times, respectively. 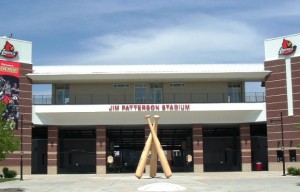 The Louisville Cardinals have made seven trips to the tournament with two of them taking them on to the College World Series in 2007 and 2013.  Louisville, top seeded in this year’s double-elimination regionals at 45-15, will face off against Mid American Conference champs Kent State (36-21) at 6 PM this Friday at U of L’s Jim Patterson Stadium.  Winners of Friday’s games will face off at 5PM Saturday afternoon while the losers will play their elimination game earlier in the afternoon.  This means that if the 35-23 Kentucky Wildcats best 34-24 Kansas, we will see another Battle of the Commonwealth to move forward in the tournament to the best-of-three Super Regionals.

Winners of the Super Regionals then move on to double-elimination bracket play to determine who will go on to the best-of-three championship series that starts on June 23 at Ameritrade park in Omaha, Nebraska.  The full 2014 NCAA baseball D1 tournament Bracket is available online.

Louisville to Face Off against Kentucky in Sweet 16 Action 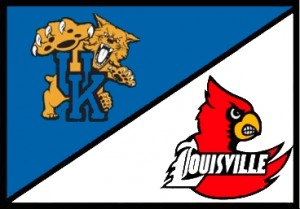 The NCAA basketball tournament is in full swing and, as usual, Kentucky has a case of March Madness!

In the Midwest corner of the bracket, our home team Lousville Cardinals entered the tournament at 4th seed and beat Manhattan to move into the next round where they put down St. Louis.  Meanwhile, the number 8 Big Blue UK Wildcats from just down I-64 beat Kansas State and then Wichita State.

Next stop: Indianapolis, where the ‘Cats and Cards will duke it out in Sweet 16 action this Friday, March 28 at 9:45PM.  CBS will carry this Bluegrass State battle so local viewers should be able to watch the game on WLKY 32.  The winner of this game will advance to take on either second seed Michigan or number 11 Tennessee.

Despite being U of L’s home, Louisville often seems like Lexington Light given the huge Big Blue Nation presence.  As the blue and red flags indicate, Derby City can be “a house divided” when the Cards and Cats face off.

Who do you want to see win Friday night's game?

Vote for your favorite above and tell us who you picked and why in the comments below and, if your pick doesn’t pay off, whether you will root for the other team in the Elite Eight round.