Kentucky Afield Outdoors: Getting To Know Your New Hunting Rifle 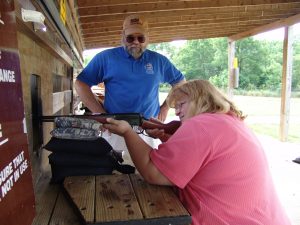 Lots of hunters receive a new rifle over the holidays or take advantage of the subsequent sales to add to their collection.

The impulse is to immediately dash off to the shooting range. Fighting back that urge and instead taking time to familiarize yourself with your new rifle is a good first step toward safe and responsible ownership.

Because the mechanics and features of rifles can vary by model and manufacturer, it’s best to approach this getting-to-know-you phase without any preconceived notions. The safety mechanisms on three popular hunting rifles illustrate the sometimes small, but not insignificant, differences between models.

“The Remington 700 has a two-position safety lever on the side of the action. The Model 70 has a three-position lever that is attached to the rear of the bolt. The Ruger bolt guns have a tang safety that is behind the bolt and on the top of the pistol grip,” said Bill Balda, hunter education supervisor with the Kentucky Department of Fish and Wildlife Resources. “These are all good places to put safeties, but this is an example of how manufacturers produce little differences in their rifles.”

The owner’s manual is a logical starting point. It will detail the main parts of the rifle and offer step-by-step instructions for safely operating and maintaining the rifle. If the booklet is missing, contact the manufacturer or check the company’s website for a downloadable copy.

“When you clean it, you should strip it down to basic components,” he said. “I would use the manual when disassembling it for the first time. I would not take the bolt apart unless I absolutely had to. You should not take the firearm out of the stock unless it’s fallen into a big puddle or been in a heavy downpour and you need to get moisture out of it. Ninety-nine times out of 100 you do not need to take the rifle out of the stock.”

At home, practice handling your unloaded gun. A firm grip with your shooting hand will help better control the rifle and makes the trigger pull feel lighter, Balda said. Work the action, focusing on a fluid motion. Dummy rounds can be excellent training aids. Most common modern centerfire rifles can be dry-fired without harming the rifle but check the manual. Pulling the trigger should be a smooth, straight-back motion.

“This is a very safe and economical way to learn the basics of shooting a good shot, which are sight alignment, trigger control and follow through,” Balda said.

For scoped rifles, boresighting is an excellent way to get “on paper” and expedite the sighting-in process at the range. This can be accomplished with the aid of a laser boresighter. Another method for a bolt action rifle with a scope starts with securing the unloaded rifle in a gun vise and removing the bolt. Place a dot on the wall or pick out an object like a light switch. Look through the receiver end toward the muzzle and move the gun until you can see your aiming point through the barrel. Then, look through the scope and adjust until the aiming point is aligned in the crosshairs.

“This is not a zero,” Balda said. “But it helps you get closer to a zero with less ammo.”

When you’re confident with your knowledge base and are ready to visit the shooting range, consider investing in ammunition from a few different manufacturers that match your rifle’s caliber. Don’t be shy about asking the sales associate or a mentor for recommendations.

If you plan to utilize a tube range maintained by Kentucky Fish and Wildlife, bring along eye and hearing protection, targets and either tape or a staple gun to affix targets to the backdrops down range. Invite an experienced shooter to join you. Their feedback can be invaluable.

Balda recommends starting the sighting-in process at 25 yards and focusing on technique. Shoot groups of three to determine the type of ammunition that your rifle shoots best. This is the time to zero-in your scope.

“When you’re shooting, and you should use a rest, what’s really important is that you hold the rifle the same way,” Balda said. “A lot of people like to just lay the rifle across the top of a sandbag and let it recoil freely. Any change of pressure in your shooting hand will change the recoil pattern.

“The rifle starts to move before the bullet clears the muzzle. So if you’re not holding it down the same way, there’s no guarantee that it will be in the same place for each shot. This frustrates a lot of people. They have this big group and they say, ‘This rifle doesn’t shoot.’ Maybe it doesn’t but it probably does. It’s just a technique problem.”

Be a deliberate and safe shooter and follow all the guidelines for the range. Should any mechanical problems crop up with your new rifle, call it a day and contact a gunsmith or the manufacturer.

“Most of the problems with accuracy that people encounter when sighting-in a rifle are due to technique,” Balda said. “It’s not that the barrel doesn’t shoot or the ammo is bad or the sights weren’t tight. It’s usually technique. You need to hold the rifle securely each and every time. Put your head on the same place on the stock in order to get the right sight alignment and pull that trigger smooth and straight to the rear.”

Spending time getting to know your new rifle builds familiarity and trust. But it’s only part of becoming a safe, responsible hunter.

Hunter education courses are offered online and in-person throughout the state. Licensed hunters born on or after Jan. 1, 1975 are required to successfully complete the course. A one-year, one-time only exemption card is available for hunters unable to complete coursework by the start of a season.

Consult Kentucky Fish and Wildlife’s website at fw.ky.gov for more information and to enroll in a hunter education course.