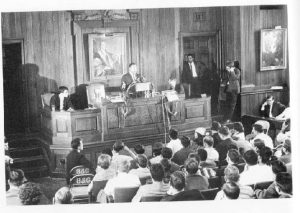 The University of Louisville’s Brandeis School of Law is marking the 50th anniversary of Martin Luther King Jr.’s visit to the school with a free, public celebration today.

The noon – 1:30 p.m. event in Room 275 at the law school will feature a speaker panel including Stephen Porter, a 1968 law school graduate who invited King to speak at UofL in 1967.  Porter, a local attorney, will share his memories of the event and discuss King’s legacy.  Other panelists will be professors Ricky Jones, Pan-African studies, and Cedric Powell, law.

“He loved to speak at colleges,” said Porter in a 2014 UofL video about King’s visit. “As a matter of fact, the ‘I Have A Dream’ speech, he gave that dozens of times before he gave it in Washington and he gave it mostly to college groups.”

According to researchers in the law school, King came to Louisville many times during the 1960s but March 30, 1967, was the only time he visited UofL.

In 2014 the university unveiled never-before-seen photos of King’s law school stopover. The photo negatives were found among some old files and records. Those photos were reprinted and are now part of a permanent exhibit in the foyer of the school’s Allen Court Room.

“This was not a very big room, so there were people outside, people literally hanging from the windows,” said Porter, recounting the overwhelming student interest in the event.

Another university MLK-focused 50th anniversary celebration will be hosted April 4 by the Anne Braden Institute for Social Justice Research.  That event marks the anniversary of the civil rights leader’s notable anti-war speech. The 11:30 a.m.-1:30 p.m. event will feature a reading of the speech; an open house will follow from 4:30 to 6 p.m.

Posted in Events, U of L | Tagged Events, history, University of Louisville, UofL