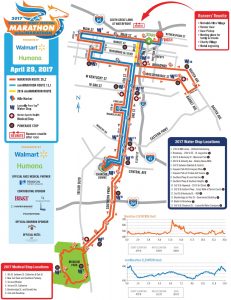 The Kentucky Derby Festival is re-routing a small portion of the 2017 Kentucky Derby Festival Marathon/miniMarathon presented by Walmart and Humana due to the renovation of the Kentucky International Convention Center (KICC). The races are set for Saturday, April 29. The courses for both the miniMarathon and Marathon will be diverted one block to Second Street. This will affect the half marathon between mile 12 and 13; and the full marathon at mile 25. Marathon runners will also notice small changes between mile 13 and 14, to make up some additional distance. Overall, the changes affect less than one mile of the entire race.

The Festival is working with Louisville Metro Police to ensure the route is safe for the runners and still accessible to traffic. As they do along the entire race route, LMPD will assist with vehicle cross traffic at intersections, to ensure residents and businesses can still reach their destination when breaks in the race permit.

Along with changes to the course, the Race Expo will also temporarily move to the West Wing of the Kentucky Exposition Center (KEC) on April 27 and 28, 2017. The Expo is traditionally held at KICC, but will relocate to KEC for both 2017 and 2018, until the renovations are complete. Complimentary shuttles will be provided to transport runners from Downtown to the Kentucky Exposition Center. Parking fees will also be waived for runners picking up their race packets at the Expo. Runners will receive all the details in their confirmation packets and can also find it online at DerbyFestivalMarathon.com.

“We’re partnering with the Kentucky Exposition Center and the Convention & Visitors Bureau to make sure this move is seamless for the runners and our vendors,” said Shanna Ward, Race Director.

Operations, parking and other amenities at the start, finish and along the course remain unchanged. Both races will still start at 7:30 a.m. on Main Street in downtown Louisville and finish at Preston and Witherspoon Streets. The runners will also run through the main gate at Churchill Downs for their lap through the infield.

The Marathon and miniMarathon marks the largest annual day of road racing in Kentucky. Registration is still available online at www.derbyfestivalmarathon.com. Current registration is $85 for the mini and $95 for the Marathon.