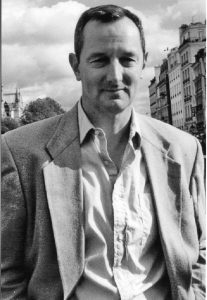 “I’m thrilled,” Smock said shortly after learning of his appointment. “Jim Wayne Miller (2015 Kentucky Writers Hall of Fame inductee) has said that Kentucky is a writerly state, and that’s so true. Many of our poets laureate have been writers I’ve looked up to, and I’m excited to join their company.”

Though he has only begun to think about goals for his two-year term as poet laureate, Smock said he wants to make poetry relevant to all Kentuckians.

“In my teaching, I like to bring poetry to everyone,” he said. “I imagine that will color some of what I do as poet laureate.”

As a boy, Louisville native Smock immersed himself in the literature of Kentucky luminaries James Still and Jesse Stuart. He even corresponded with Stuart while working on a book report. In his last letter to Smock, Stuart wrote, “I hope you get an A,” an endorsement Smock made sure to include in his report.

“And I believe I did,” Smock said.

Though he was born in Louisville and has lived in the city for much of his life, Smock’s work reflects upon his formative years spent in the country.

“I find myself drawn to nature. When I was 6, we moved to Fern Creek (in Jefferson County) where my father built a house on a hill in the midst of a forest. Those years were spent wandering fields and forest mostly on my own,” Smock said. “It was laying my imagination on that landscape and drawing from that experience. I can’t say I direct my mind that way. The inspiration comes to me, but those sources give me a lot to work with.

With the exception of one summer teaching in Denmark, Smock has lived, written and taught in Kentucky all his life. An author of 10 books of poems and essays, with two more on the way, and four chapbooks, Smock has earned several awards for his writing and teaching, including the 2002 Henry Leadingham Poetry Prize, the 2003 Jim Wayne Miller Prize for Poetry, Bellarmine University’s 2005 Wilson Wyatt Faculty Award and the 2008 Kentucky Literary Award for Poetry. The Kentucky Arts Council honored him in 1995 with an Al Smith Individual Artist Fellowship in poetry.

“Frederick Smock has the passion and insight required to take on this important literary ambassador position for Kentucky and I have no doubt that he will impact people’s lives in meaningful ways through his work in this role,” said Lydia Bailey Brown, arts council executive director. “The arts council looks forward to working collaboratively with him during his tenure.”

Although the Writers’ Day and Poet Laureate Induction ceremonies of May 1 will include traditional elements from past events, this year’s celebration will include some modern twists and will provide a more diverse program, incorporating literary-related arts into the event and including youth talent. Grant County High School senior Haley Bryan, Kentucky’s 2017 Poetry Out Loud state champion, will present a recitation and Kentucky Crafted visual artist Mike Maydak will create a performance painting interpreting a literary impression of the day. In addition, Louisville music group Small Time Napoleon, a juried member of the arts council’s Performing Artists Directory, will perform.

Kentuckians who cannot come to Frankfort for Writers’ Day can still participate by organizing events in their own communities. The Writers’ Day Planning Guide is a free publication, downloadable from the arts council’s website. It provides a blueprint for planning local celebrations of Writers’ Day.

The Kentucky poet laureate promotes the literary arts in Kentucky through readings of his work at community and educational events, meetings, seminars and conferences across the state. Since 1995, the governor has appointed the position in consultation with the arts council. Smock succeeds poet laureate George Ella Lyon, who was appointed in 2015. Smock will serve through the end of 2018.