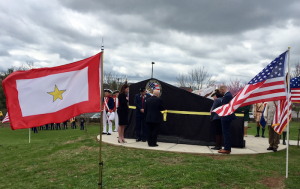 Secretary of State Alison Lundergan Grimes on Tuesday participated in the dedication of a memorial monument honoring fallen military service members and their families. Grimes and other state and city leaders led the ceremony to unveil the Gold Star Families Memorial Monument at Veterans Park in Lexington.

“Today, we honor the ultimate sacrifice of men and women who stood up and served courageously so that we could live freely,” said Grimes. “And we know that not only have these individuals sacrificed, but so have their families. For that, we are eternally grateful.”

The monument is the 18th of its kind in the nation and the third in Kentucky. The Hershel “Woody” Williams Congressional Medal of Honor Education Foundation assists communities in raising funds and establishing the monuments, including Lexington’s. Williams joined Grimes in the dedication.

As Secretary of State, Grimes has been a steadfast advocate for active military and veterans. Her recommendations to improve military voting resulting from a trip to the Middle East were made law as the first-ever Military Heroes Voting Initiative. The initiative led to a nationally-recognized portal which has successfully assisted thousands of Kentucky military and overseas citizens to cast ballots in elections.

In 2014, Grimes helped several veterans and advocates establish the Kentucky Veterans Hall of Fame, which honors Kentucky military veterans who have demonstrated exemplary military service as well as military/civilian service to their communities, state, and nation.