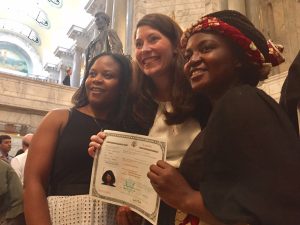 Friday at the State Capitol, the first ever held in the building.

Grimes recognized 40 new citizens from 25 different countries who took the oath of citizenship to become naturalized Americans officially. She spoke to the new citizens and their families about the importance of voter participation, civic engagement, and being committed to their communities.

“This experience is awe-inspiring. You’re sitting under this capitol dome, the very seat of government in Kentucky, and becoming Kentuckians and Americans today,” Grimes said. “To all of you here, no matter where you are from, I say ‘Welcome home.'”

Grimes encouraged the new citizens to register to vote via Kentucky’s online registration portal at GoVoteKY.com, a right they attained after becoming citizens. The portal is easy to navigate and it takes just a few short minutes to complete the registration process, Grimes said.

“Standing in the center of the rotunda is a statue of Kentuckian Abraham Lincoln, the 16th president of the United States. It is important to remember his words, ‘You cannot escape the responsibility of tomorrow by evading it today.’ As a citizen, you have the right and the responsibility to be active and engaged in your government and your community.”

Grimes expressed to the new citizens the importance of participating in elections and asked them to go to the polls in every cycle.

“Your vote is your voice, and now you are able to express your views at the ballot box. I encourage you to cast your vote in every cycle, in every election, in every race you are able. Our future is built by people who vote,” said Grimes.

Judge Gregory F. Van Tatenhove of the Eastern District of Kentucky presided over the proceedings.

“You chose us,” said Van Tatenhove. “And with your certificate, you now have a responsibility to protect and use the rights you have been given as a citizen of the United States.”