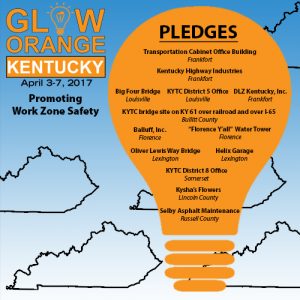 “Kentucky transportation road crews risk their lives daily to build and maintain bridges and roads across the Commonwealth so that we all can connect with people and places that are important to us,” said Gov. Matt Bevin. “As a young man, I worked for a state highway department and know about the dangers presented to men and women doing their jobs in highway work zones. These public servants are fathers, husbands, brothers, daughters and friends. Let’s all do our part to take precautions to make sure these highway workers – real people with real lives – get home safely each night.”

With roadway construction season kicking off in April across Kentucky, many motorists will encounter at least one work zone in their daily commute. Although highway work zones are high-risk sites for crew members, the lives of drivers and their passengers are also on the line in a work zone. In fact, Federal Highway Administration statistics indicate that motorists, not workers, are more at risk in a work zone. In a typical five-day work week, an average of seven motorists and one worker are killed around the nation in work zones. To help spread awareness, Gov. Bevin signed a proclamation declaring April Work Zone Safety Month in Kentucky.

Last year, there were 674 work zone related crashes, 143 injuries and 10 fatalities in Kentucky. To increase awareness of work zone safety and the lives affected by preventable accidents, KYTC asked the public to support this year’s campaign through sharing work zone stories. Retellings of near misses while working, losing loved ones in work zones and observations of negligent driving behavior were featured in several submissions. Each story stressed the risk of working in a work zone and the lives at stake.

“When he died, a piece of me died also – a void that you can’t replace,” wrote Tonya Ashby about her brother Kendale T. Ashby, who was hit by a car in 2014 while working in an active highway work zone.

Kendale Ashby was a father of four, a husband, a brother and a best friend.

“The Cabinet is grateful for public support in the form of personal stories and pledges from public and private partners to ‘Glow Orange’ to promote work zone awareness,” said KYTC Secretary Greg Thomas. “The safety of our road crews and of motorists in work zones is in each of our hands.”

Orange hues in the Bluegrass

Another element of KYTC’s 2017 work zone awareness campaign is “Glow Orange, Kentucky” week, an initiative inspired by the national “Go Orange Day,” which also promotes work zone awareness. KYTC has invited organizations and citizens throughout the Commonwealth to illuminate buildings, landmarks, bridges, structures and homes with the color orange to show support during the week of April 3-7.

The Cabinet encourages the public to submit “Glow Orange, Kentucky” safety selfies taken in front of illuminated structures to Facebook and Twitter using #glowky. Businesses and agencies that have pledged to “Glow Orange” are featured on KYTC’s social media pages.

Lives in your hands

For the protection of all lives in work zones, KYTC asks drivers to practice 10 work zone safety tips:

2.    Respect the posted speed limits – even if workers do not appear to be present.

4.    Keep a safe distance from workers and equipment.

7.    Allow extra time to get to your destination if traveling through a work zone.

9.    Before leaving home or work, check out goky.ky.gov or use the free WAZE app for traffic information.

10.  Be patient and remain calm. Construction crews are working to make the roads better for you.

Although Cabinet engineers and contractors schedule work to minimize delays and crashes, the responsibility to drive cautiously through a work zone lies with motorists.

To read work zone stories and stay current with KYTC’s 2017 work zone awareness campaign, connect with the Cabinet at www.facebook.com/kytc120/ and https://twitter.com/KYTC and follow the #inyourhandsky and #glowky discussions. The Cabinet will post related information to social media throughout the month of April.