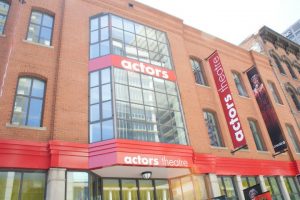 Artistic Director Les Waters and Managing Director Kevin E. Moore are proud to introduce the 2017-2018 Professional Training Company. Each year, Actors Theatre of Louisville invites the most talented and highly motivated early-career theatre professionals in the nation to undertake a nine-month long training program that combines hands-on practical experience with educational seminars and professional guidance. Entering its 46th Season, Actors Theatre’s Professional Training Company is one of the oldest pre-professional training programs in the nation, and has built an incredible legacy of supporting the long-term vitality of American theatre through the mentorship and fostering of the best forthcoming talent in the field.

Waters shared, “I am thrilled to see this vital program continue to flourish and witness our alumni colleagues expand their leadership in arts communities across the country. Actors Theatre is honored to champion these talented young professionals as they become the next generation of theatre artists and leaders.”

Selected from more than 2,000 applicants from across the nation the 2017-2018 Professional Training Company consists of 42 college graduates—each of whom is extremely talented in their chosen field.  Through their participation in the nine-month long program over the course of the 2017-2018 Season, they will receive practical training, the opportunity to work with celebrated artists, and a firsthand look at the inner workings of one of the nation’s leading regional theatres.  The company will also mount a number of productions, including new work by nationally renowned playwrights, and original creations developed by the members of the company themselves.

Actors Theatre’s Professional Training Company is generously supported by a significant grant from The Roy Cockrum Foundation. The $1.2 million award supports grants over a ten-year period for each apprentice during the nine-month program, and enables year-round employment for the program’s leadership. Founded by Roy Cockrum, the Foundation supports world-class performing arts projects in not-for-profit professional theatres throughout the United States. The Foundation considers grants by invitation only and is dedicated to helping nonprofit theaters reach beyond their normal scope of activities and undertake ambitious and creative productions.

Apprenticeships for the 2017-2018 Season have been awarded to: