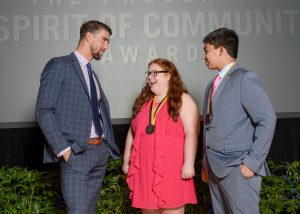 Olympic gold medalist Michael Phelps congratulates Anna-Maria Beck, 17 (center) and Andrew Dunn, 14 (right), both of Louisville, on being named Kentucky’s top two youth volunteers for 2017 by The Prudential Spirit of Community Awards. Anna-Maria and Andrew were honored at a ceremony on Sunday, May 7 at the Smithsonian’s National Museum of Natural History, where they each received a $1,000 award. (PRNewsfoto/Prudential Insurance)

Barret Traditional Middle School student Andrew Dunn was recently honored in the nation’s capital for his outstanding volunteer service during the 22nd annual presentation of The Prudential Spirit of Community Awards. Dunn – along with 100 other top youth volunteers from across the country – received a $1,000 award and personal congratulations from Olympic gold medalist Michael Phelps at a ceremony and gala dinner reception held at the Smithsonian’s National Museum of Natural History.

The Prudential Spirit of Community Awards program, sponsored by Prudential Financial in partnership with the National Association of Secondary School Principals (NASSP), named Dunn Kentucky’s top middle level youth volunteer in February. In addition to his cash award, he received an engraved silver medallion and an all-expense-paid trip with a parent to Washington, D.C., for four days of recognition events.

Dunn started a citywide campaign to mobilize students and other community members to perform random acts of kindness throughout the year. He got the idea four years ago when his parents set up an Advent calendar that challenged him to do something nice for someone every day in December. He came up with ideas such as anonymously leaving donuts for neighbors. “This got me thinking about the impact we could have if I could get all my friends involved,” he said.

Calling his campaign RAK Louisville (“Random Acts of Kindness”), he set up a website, app and social media offering ideas on how to make a positive difference in someone’s day, and talked to friends, classmates, neighbors and his soccer team about his project. Dunn worked with the mayor’s office to have December 23 proclaimed as Random Acts of Kindness Louisville Day, and two TV stations interviewed him. Today, he and the RAK Club at his school identify student-friendly service opportunities throughout the year and mobilize individuals and teams to work on a variety of projects, many of which benefit organizations serving homeless and other people in need. One of their bigger projects was organizing a Thanksgiving dinner for 168 homeless people. Dunn said he hopes RAK will expand beyond Louisville’s borders. “People want to serve but they just don’t know how to start,” he said.

“These honorees have done exemplary work to contribute to the health and vitality of their communities, and we look forward to seeing the great things they achieve in the future,” said John Strangfeld, chairman and CEO of Prudential Financial, Inc. “Congratulations to each of these extraordinary young volunteers.”

“It’s a privilege to celebrate these students not only for outstanding volunteer service, but for the example they’ve set for their peers,” said Jayne Ellspermann, president of NASSP. “These honorees prove that one person truly can make a difference.”

The Prudential Spirit of Community Awards program was created in 1995 to identify and recognize young people for outstanding volunteer service – and, in so doing, inspire others to volunteer, too. In the past 22 years, the program has honored more than 120,000 young volunteers at the local, state and national level.