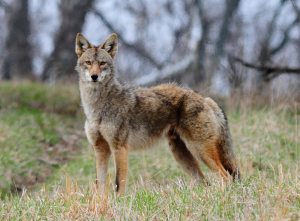 An expansion from its historic range in the interior plains brought the coyote to Kentucky where as recently as the early 1970s sightings of these animals were still considered rare.

Coyotes are now common across the state but their presence in urban and suburban areas can surprise residents.

“People in cities like Los Angeles, Chicago and Denver have grown accustomed to seeing a coyote strolling through a city park,” said Laura Palmer, furbearer biologist with the Kentucky Department of Fish and Wildlife Resources. “In Kentucky, people are still getting used to seeing them in urban areas.”

Reports of coyote sightings in residential areas increase in the spring and early summer as coyotes breed and give birth to pups.

Since total eradication of coyotes is not possible, having a basic understanding about these wild animals, which can range in color from reddish to tan to grizzled gray and black, can ease concerns and limit potential conflicts.

“Coyotes are often misunderstood,” Palmer said. “Most do not bother people. Many times, people do not even know coyotes are living near their homes.”

Coyotes tend to be more active from dusk to dawn when living in close proximity to people. Even in populated areas, nature typically provides ample food. Mice, deer, voles, rabbits, raccoons, fruit and goose eggs can be part of a coyote’s diet.

“Coyotes typically shy away from human activity but they may take advantage of food around homes if natural prey is limiting, a coyote is injured or sick, or young have not learned to hunt effectively,” Palmer said.

Coyotes can lose their fear of humans if conditioned to depend on people for food, and conflicts can arise from people feeding them – either intentionally or unintentionally.

“Do not leave pet food outside and make sure garbage is secured,” Palmer said. “Discourage your neighbors from feeding feral cats, raccoons or coyotes themselves.”

She also recommends bringing bird feeders inside at night and removing seed that has fallen on the ground. Bird feeders attract animals that in turn attract coyotes. Plug any holes under fences, block access to crawl spaces and fence around gardens. Motion-activated lighting around the house can act as a coyote deterrent. Also, consider turning on outside lights and checking the yard for unwanted animals before letting a dog outside at night.

If you are concerned about pets being outside, keep them inside or kennel them when they are unattended, if possible. When walking a dog, use a short, non-retractable leash that is highly visible and vary your walking routine.

A coyote that does not flee upon encountering a person could be sick, injured or habituated to people. Do not panic if you see a coyote or one approaches you, Palmer said.

Coyotes are curious by nature and sometimes follow people or dogs to see what they are doing in their territories or to see that they do not get too close to their dens and pups, she said.

Other suggestions: Don’t approach a coyote or linger to snap photos or take video. Don’t turn your back on a coyote and don’t run. Running away can diminish the coyote’s fear of people and may trigger its chase instinct. Don’t harass a coyote if it is cornered, with pups or seems sick or injured. It’s best to back away slowly or try to scare it away with loud noises. Make yourself look bigger by waving your arms, widening your stance or waving a stick. Take a step or lunge toward the coyote to establish dominance. Throw a rock or a stick in its direction but not directly at it. Pick up small dogs and children. Keep scaring the coyote until it’s out of sight. It’s also a good idea to teach children to recognize coyotes, never approach one and scare them away.

If you happen upon what you suspect is a den, like a hollow tree or brush pile, slowly back away and leave the area. Coyotes are protective of their pups, which stay in the den with the mother for about three weeks and learn to hunt when they are eight to 12 weeks old. Family groups typically break up and disperse in late summer and early fall.

Understanding coyotes can reduce potential conflicts with them.

If your community has a Facebook page, consider sharing tips for coexisting with coyotes and deterring these animals from becoming too bold. One resource Palmer recommends is the website urbancoyoteresearch.com. Kentucky Fish and Wildlife’s website at fw.ky.gov also offers helpful information.