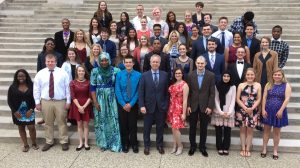 Mayor Greg Fischer on Monday honored 49 public, private and Catholic students who have excelled in and out of the classroom with his annual Outstanding High School Seniors Award.

This year’s recipients include immigrants from Nicaragua, Cuba, Mexico and other countries, along with students who have overcome illness, personal struggles, disabilities and behavioral issues to achieve success.

The students include 16 National Honor Society members, nine Governor’s Scholars, two National Merit finalists and others who have excelled in the arts and on the sports field. Nearly all of the students have plans for college, and three are enlisting in the military.

All have contributed to their community through service work, including several involved in the Mayor’s Give A Day week of service and the international WE Day.

“These students have shown resiliency and a commitment to learning and to compassion,” the Mayor said. “We celebrate them, and we hold them up as models for other students in our community.”

Principals and guidance counselors at public, private and Catholic schools throughout Louisville nominated students for the award, which were presented in a ceremony on Monday evening at Metro Hall.

Ford is the presenting sponsor of the Outstanding High School Seniors Award, which began in the mid-1980s. AT&T and C&H Audio Visual Services are supporting sponsors.