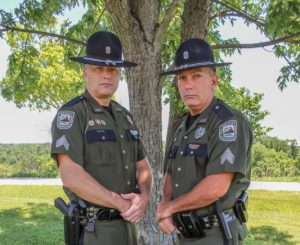 Fast action by conservation officers with the Kentucky Department of Fish and Wildlife Resources saved the life of a volunteer who collapsed June 17 at a Northern Kentucky sporting event for children. An ambulance transported the victim to St. Elizabeth Hospital-Edgewood Campus for treatment.

“Everyone is proud of these officers,” said Kentucky Fish and Wildlife Commissioner Gregory Johnson. “Their training and quick response turned a potentially tragic situation into one of hope.”

The incident occurred Saturday morning during the annual Youthfest at Lloyd Wildlife Management Area (WMA) near Crittenden. Kentucky Fish and Wildlife Sgt. Scott Horn was assisting with the event when he saw a volunteer with the Boone County Bow Hunters Club collapse to the ground.

Horn summoned fellow department Sgt. Chris Fossitt, who radioed for an ambulance. Horn and Fossitt could detect no pulse on the victim. The two immediately began performing the chest compressions they learned as part of their professional training. Kentucky Fish and Wildlife Capt. Charles Phillips placed a CPR mask on the victim to assist with breathing.

The officers continued their CPR efforts 10-15 minutes. Phillips assisted with a defibrillator in an attempt to restart the victim’s heart, but it proved unsuccessful. The officers continued CPR efforts until the arrival of an ambulance. By this time, thanks to the continuous chest compressions applied by Horn and Fossitt, Phillips detected a pulse.

The victim, who is not being named due to federal privacy laws, is currently recovering at St. Elizabeth Hospital.

The Fifth District Federation of the League of Kentucky Sportsmen sponsors Youthfest. Fifth District Director Mike Coyle, who witnessed the events, credited the actions of the Kentucky Fish and Wildlife officers with saving the man’s life. “Without their superior training and quick action,” Coyle said, “I don’t believe the outcome would be the same.”