There is Still Time To Enjoy The State Fair 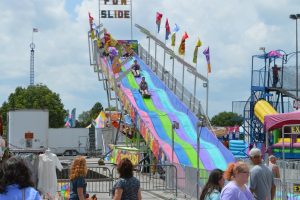 Today marks the beginning of the end for the 2017 Kentucky State Fair as the last two days of the event kick off.  With highs in the low 80s and clear skies all weekend, fair goers should be able to comfortably enjoy the multitude of events scheduled all weekend.

While many of the small livestock animals are gone, visitors will still be able to see beef cattle, sheep, and swine.  Visitors today can take in the last day of the 2017 World Championship Horse Show in Freedom Hall (tickets required) and, on Sunday, spectators will be able to enjoy the horse and mule pull in Broadbent Arena.  If exotic animals are more your thing, stop by the area near the 4-H exhibits to see Australian fauna up close.

Fans of live entertainment will be able to see a number of local dance teams, musical acts, and more performing on three stages throughout the exhibit hall area.  Performances will feature everything from street dancing to clogging, jugglers, magicians, a capella, and a big friendly robot this weekend.  Just outside the exhibit hall, fair goers will see that the midway – dubbed Thrillville – has been moved closer to the rest of the fair action.  There are two main performance areas located in Thrill Ville that will feature the Marvelous Mutts (frisbee and water diving dogs) and the famous acrobatic family, Flying Wallendas.  Near Thrillville, there are four live music tents that have a rotating schedule of performances as well as an all-day karaoke show.  The full schedule of events can be found within the new Kentucky State Fair app.

Sunday night will feature a Main a Stage performance of the Southern Uprising Tour, that includes performances by Travis Tritt, Charlie Daniels Band, Marshall Tucker Band, and Lee Roy Parnell.  Admission is separate from the cost to visit the fair, but tickets are still available. The Turf Concert Series will feature Theory of a Deadman tonight, and Matthew West, Colton Dixon, Hawk Nelson, and Sarah Reeves on Sunday. Admission to these two concerts is included in the general fair admission.

For the foodie, the Fair will not disappoint.  Normal fair-food items can be found throughout the entire venue, such as gyros, philly cheese steak, brats, funnel cakes, etc.  Inside the exhibit hall, you may be able to find a stand selling deep fried PB&J sandwiches.  Outside near the live music tents, there is a mobile seafood grill that features fried oysters and conch, tuna burgers, ostrich burgers, alligator, and much more.  In the Kentucky Cookout tent, fair goers will find everything from locally-sourced sweet corn, catfish, ice cream, to pork chop sandwiches.

Gates to the 2017 Kentucky State Fair open at 7 AM, but the exhibits do not open until 9 AM. Admission is $10 per person and parking is $10 per vehicle.  If visitors ride TARC to the Exposition Center, admission is reduced to $7.