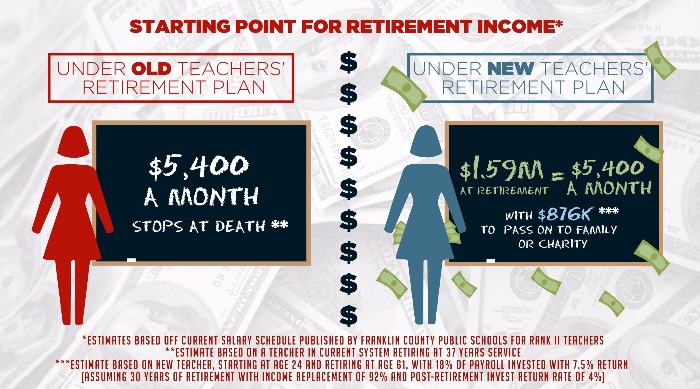 The Bevin administration released data showing new teachers enrolling in the defined contribution retirement plan, a 401(a) plan, can be wealthier at retirement than if they began in the defined benefits plan currently in law.

The estimate shows that a new teacher starting at age 24 and working until age 61 will start retirement with $1.59 million. If reinvested, this could translate into a payout of $5,400 per month with a yearly increase of 1.4 percent for inflation. This will also leave $876,000 for the teacher to pass on to family or charity. In contrast, the same teacher retiring at 37 years enrolled in the defined benefit plan currently in place would receive approximately $5,400 per month for life with no benefit to pass on to family or charity.

“New teachers who fully fund their new defined contribution retirement plan can retire with a substantial retirement benefit over which they will have complete control. The benefit can be a monthly payment or a large amount to satisfy an urgent need or desire. Plus, to the extent that funds are not used during retirement, money can be transferred to a surviving spouse, other family members, or charity,” said State Budget Director John Chilton. “Teachers and all public employees will have the comfort of knowing that a fully funded defined contribution plan can contribute significantly to a secure retirement.”

The defined contribution calculation above is based on 18 percent of payroll, for 37 years, invested at an expected 7.5 percent rate of return – the investment assumptions that the Teachers Retirement System currently uses in its projections. The calculation also assumes income replacement at 92 percent and a post-retirement investment rate of return at four percent for 30 years. If the teacher chooses to reduce the income replacement amount to 80 percent, which is the rate financial advisors recommend to maintain equivalent lifestyle, he or she would draw $4,700 per month with $1.435 million left to pass on to family or charity.

Both the defined contribution and defined benefits calculations are based off the current salary schedule published by Franklin County Public Schools for Rank II teachers with a starting salary of $42,000.

Critics of the “Keeping the Promise” plan argue that teacher recruitment will be negatively affected by the proposed pension reform, but the data provided directly refutes this talking point. “Keeping the Promise” will save Kentucky’s pension systems while simultaneously providing a stable financial foundation for incoming, current and retired teachers and public servants.