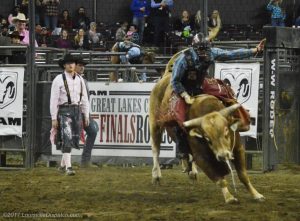 From barrel racing and roping to the rough stock events of bronco and bull riding, the North American Championship Rodeo brings fast paced action to freedom hall as dozens of cowboys and cowgirls compete for a purse of tens of thousands of dollars in prize money.  The action kicks off at 7:30 PM in Freedom Hall.

The event isn’t just roping and riding either.  Throughout the competition, the crowd is entertained with numerous acts such as the “The Most Recognized Cowboy in the World,” Whiplash the Cowboy Monkey, the illuminating equestrian riding show from the Red Rock Riders Drill Team, and the comedy routines of the PRCA rodeo clown.

Tonight’s event also features two special promotions.  To mark Veterans Day, in honor of those who have served our country, active military members, veterans and first responders will receive 50% off of their admission.  Tonight is also Kid’s Cowboy Hat Night – the first 500 children in the lobby of Freedom Hall after 6PM will receive a free straw cowboy hat.

You won’t want to miss this action packed evening at Freedom Hall!

Visit us on Facebook to see more photos of the action.