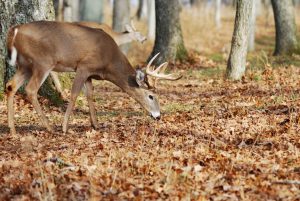 A burst of fall colors, frosty mornings and an uptick in deer activity recently are encouraging and telling signs for hunters.

The season that contributes the greatest percentage of Kentucky’s annual deer harvest and fills many freezers with protein-rich venison is almost here.

“Opening day should be spot on,” said Gabe Jenkins, deer program coordinator for the Kentucky Department of Fish and Wildlife Resources. “Our gun hunters should have some fantastic deer activity. The start of the season falls early this year. It touches on the end of the chase period and continues into the peak of the rut. We should see some good movement early and late in the season.”

County zone assignments are published in the annual Kentucky Hunting and Trapping Guide, available on the department’s website at fw.ky.gov and where licenses and permits are sold. The guide also provides information about license and permit requirements, hunter education and hunter orange requirements, bag limits and legal equipment for deer hunting. Also available on the department’s website is a detailed list of frequently asked questions about deer hunting in Kentucky. Type “Deer Season FAQs” into the search box on the homepage to access it.

Hunters in Kentucky have taken more than 130,000 deer annually over the past five seasons. The 2016-17 tally was the third highest on record with the modern gun season harvest accounting for more than 70 percent of that figure.

This year, the modern gun season harvest will provide biologists additional data to further assess the scope and impact of the outbreak of epizootic hemorrhagic disease (EHD) in eastern Kentucky.

As of Nov. 2, Kentucky Fish and Wildlife had received reports of more than 4,500 sick or dead deer across the state since mid-July. The outbreak was confined primarily to counties east of Interstate 75 and along and south of Interstate 64.

EHD is a virus spread by small biting flies or midges. A recent cold snap effectively ended the outbreak since frost kills the insects that carry the disease.

The virus is not transmissible to people and the meat is safe to eat. In any year, hunters are advised to avoid eating the meat from animals that appear to be overtly sick.

Hunters concerned about hunting elsewhere in the state should have no reservations whatsoever, Jenkins said. The herd remains robust.

“We’ve got a lot of deer,” he said. “I look for it to be just as strong in the rest of the state as it has been in recent years. We had a good fawn year last year, good acorns last year, a mild winter and nice summer. All factors for good survival, good antler production. Lots of goods in there.”

The statewide deer harvest from September’s record opening weekend of archery season through October was up compared to 2016. Harvest reports from the youth-only gun and early muzzleloader seasons in October were down.

A middling mast crop could play to the hunter’s favor. This year’s statewide mast survey found about a third of white oaks with acorns. Red oak acorn production was better at 63 percent. White oak acorns are the first choice for deer because they are sweeter and more palatable to deer than red oak acorns, which have higher tannic acid.

In addition to the hunter orange and hunter education requirements, as well as following the guidelines for safe handling of firearms, hunter safety during the modern gun season also extends to the use of tree stands.

Serious accidents can be prevented by following the manufacturer’s instructions for installation, use and maintenance of tree stands.

Hunter education classes offered by Kentucky Fish and Wildlife cover the basics of tree stand safety. Olivia Dangler, a conservation educator with the department, said hunters must not let their guard down.

“Do not let your excitement cause you to forget about safety,” she said. “It does not matter how good of a climber you are, or if you think it will never happen to you, always wear a harness and stay clipped into the tree because it can save your life.

“Inspect your equipment prior to use and wear a full body harness whether you are hanging, practicing or hunting from a tree stand. Once you leave the ground, your harness should be connected to the tree. According to the International Hunter Education Association, 99 percent of fall victims injured were not attached to the tree.”

Tree stands and harnesses are rated to support up to their stated weight capacities.

Keep your hands free and never carry equipment while climbing up to or down from a tree stand. Use a haul line to raise or lower equipment instead.

“Firearms should be unloaded with the safety on,” Dangler said. “Attach the haul line to the sling or stock so the muzzle is pointed down when pulling it up to you or lowering it to the ground. If using a bow while hunting, make sure it is unloaded before attaching the haul line and have arrows secured in covered quiver.”

An online tree stand safety course can provide a good introduction or refresher. A free, interactive course is available through the Treestand Manufacturer’s Association website at tmastands.com.

Hunters should choose trees that are straight and large enough to adequately support their tree stands. Avoid ash trees. The emerald ash borer has decimated the ash tree population in recent years. Any ash trees still standing should be considered unsuitable. Knowing where ash trees are in proximity to your location is another important consideration. Dead limbs can break under their own weight without warning.

Hunters who are still looking for a place to hunt can find information about public lands on the department’s website. On any wildlife management area that allows gun deer hunting, anyone hunting from inside a ground blind must now attach a hat or vest made of solid, unbroken hunter orange material to the outside so it is visible from all sides. Hunter orange clothing requirements still apply for anyone inside the blind.

“Get out there and go,” Jenkins said. “The full-swing rut is definitely here.”