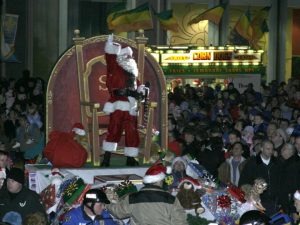 Mayor Greg Fischer announced today that Light Up Louisville, which kicks off the month-long celebration of Louisville’s Holiday in the City, is returning to its roots at Jefferson Square and Metro Hall.

Now in its 37th year, Light Up, the official starting point for the holiday season in Louisville, brings together people from all over the city, along with family, friends and visitors, to enjoy a day full of excitement, entertainment and community.

“For so many of us, the holidays mean ‘coming home,’ gathering with family and friends in traditional ways and comfortable spaces,” the Mayor said. “So it’s great that this year’s Light Up Louisville is also coming home, to Jefferson Square Park, where it first began.”

And the festivities continue through New Year’s Day, as Holiday in the City, a gift from MainSource Bank and powered by LG&E, provides family-friendly fun with a pop-up ice skating rink at Holiday Square at Fourth and Jefferson streets.

Light Up Louisville, always held the Friday after Thanksgiving, begins at 4 p.m. that day, as children are encouraged to visit Santa’s Workshop on the first floor of Metro Hall, and create holiday crafts. The first 250 people will receive a discount coupon to be used at the nearby Holiday in the City ice skating rink.

There will be a vendor village at Sixth and Jefferson streets, with holiday crafts, treats and gifts for sale. And the Louisville Visitor Center located near the ice skating rink will be open during Light Up Louisville, offering giveaways, treats and activities.

The main Light Up Louisville stage on the west lawn of Metro Hall will feature live entertainment beginning at 4 p.m. until the start of the Lots of Lights parade at 6:30 p.m.  The parade will start at Seventh and Jefferson streets and proceed east on Jefferson to Fourth, where it will travel through Fourth Street Live! before dispersing at Muhammad Ali.

The parade, featuring floats, bands, carolers, car clubs, children’s groups and civic organizations, will end with the arrival of Santa Claus, as he and Mayor Fischer illuminate the city Christmas tree in Jefferson Square, along with much of the rest of downtown Louisville, as the sky is lit by Zambelli fireworks.

Following the Light Up moment, from 8:30 to 10:30 p.m., entertainment on the main stage will resume and children are invited to go back inside Metro Hall and get a free picture with Santa Claus.

At Holiday Square, located at Fourth and Jefferson streets, visitors can enjoy the full-size ice skating rink, featuring real ice. A 60-minute skating session with skate rentals is $12 per person; it’s $9 if you bring your own skates. The rink will be open November 23 – January 1.

Holiday in the City visitors are reminded that Fourth Street Live! plans a Winter Wonderland experience, including free pictures with Santa, Friday through Sunday until December 23.

Mike Gleeson, Regional President for MainSource Bank, says, “We are honored to be part of such a great event. Our commitment to the Louisville area and all the local communities we serve is a top priority at MainSource Bank. We’re excited for a great Holiday season, with the hope that many residents and visitors enjoy this incredible event.”

“It’s great to be back again this year, helping our community sparkle throughout the holiday season, as we continue our long-standing partnership with the city,” said Victor A. Staffieri, Chairman and CEO of LG&E and KU Energy. “Bringing Light Up Louisville festivities back to Metro Hall while maintaining the ice skating venue is a great opportunity for people to get out, walk around downtown and enjoy everything it has to offer.”

Mayor Fischer urges people to share their photos from Light Up Louisville and Holiday in the City on social media using the hashtag #AroundLou.

For more information, go to:  www.specialeventslouisville.com