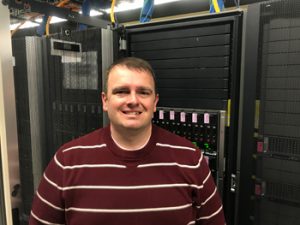 “Louisville Metro has been recognized as one of the most innovative, forward-facing cities in the U.S., and our city government has a Department of Information Technology that can deliver the people-friendly solutions of today and tomorrow,” Mayor Fischer said. “Chris Seidt has been in the middle of many of our innovation efforts as a respected member of the IT team.”

Seidt has worked for the city’s Department of Information Technology since 2008, occupying roles including Network Engineer and IT Operations Manager.

He enters the Director position after more than a year as the city IT Department’s Civic Technology Manager. In this role, he developed the Louisville Fiber Infrastructure Technology project, advised city leaders on broadband and fiber technology, and developed partnerships for Smart City technologies.

“I’ve been proud to be a part of an IT Department that works every day to deliver excellent technology solutions to citizens and our colleagues, and I look forward to working with the team and Mayor Fischer to create more innovative technology solutions for Louisville,” Seidt said.

Seidt begins the new role immediately. He will report to Grace Simrall, the city’s Chief of Civic Innovation.