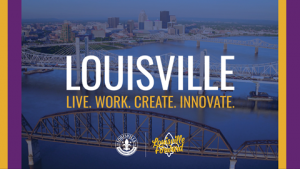 ‘The Barrel,’ a creative urban attraction designating the intersection of Fourth and Main Streets as the center of the Bourbon District, was unveiled today.  “The iconic Barrel will function as a gathering space for visitors to the Bourbon District, as well as serve as a new and exciting showpiece to celebrate the bourbon renaissance in Downtown Louisville,” said Rebecca Matheny, Executive Director of the Louisville Downtown Partnership (LDP).  “We expect it will join the bat at the Louisville Slugger Museum & Factory as a must-do photo opp. activity in Downtown.”

“‘The Barrel’, which launched the second phase of the Bourbon District, is meant to be walked through, as if one is passing through the entire history of the bourbon industry,” said Cynthia Torp, President and Executive Director of Louisville-based Solid Light, Inc. who designed, created and installed ‘The Barrel’.  The piece has five hoops — the two smallest hoops are 9’3” in height, 11’3” in width, progressing to two larger hoops that are 10’3” in height and 13’4” in width, with the middle hoop reaching 11’3” in height and 15’4” in width.  The path through ‘The Barrel’ is ADA compliant.

The materials used to create the enormous feature are meant to reflect those of an actual oak barrel.  The hoops are made of cast concrete with a “stave wood” engrain.  Actual reliefs of wood were pressed into the concrete to give it an authentic wooden texture.  The outside is lined with corten steel, reflecting the metal hoops used on a bourbon barrel.  The inside of the hoops are lined with a black powder coated aluminum, imitating the char found in barrels after they are fired, an essential step in the bourbon-making process.

At the entrance of ‘The Barrel’ is an interpretive sign that gives an overview of the bourbon industry in Downtown Louisville.  The sign also includes a map showing all of the bourbon historical sites and attractions in the district.

The renaissance of bourbon has sparked tourism and development in Downtown Louisville.  “While Louisville’s bourbon story originated in the late 1700’s, it’s only been in the last decade that bourbon tourism has become a defining point of our city’s authenticity.  We believe the Bourbon District helps share this cultural heritage with locals and visitors, and enhances their appreciation of Louisville’s unique destination experience,” said Karen Williams, LCVB President and CEO.

“Bourbonism® is thriving in Downtown Louisville, with four distillery experiences already open, and three more slated to open within the year.  Our hope is that ‘The Barrel’ becomes an iconic landmark photographed and shared all over the world, further defining Louisville as the home of the bourbon industry,” said Mayor Greg Fischer.

LDP drives economic growth in Downtown and adjacent central-city neighborhoods for the benefit of the entire region, as well as oversees multiple on-street enhancements that help establish Downtown Louisville’s distinctive character and widespread appeal.  LDP believes the economic engine of any great city starts with a strong Downtown.  For more information, go to:  LouisvilleDowntown.org.