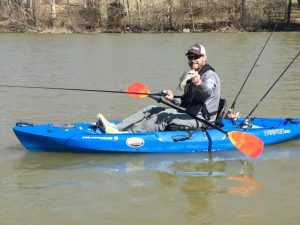 Crews from the fisheries division of the Kentucky Department of Fish and Wildlife Resources will remove largemouth bass from Beaver Lake in Anderson County in the coming weeks to alleviate overcrowding and improve growth rates of fish.

“In March of 2017, we took nearly 2,400 largemouth bass out of Beaver Lake,” said David Baker, Central Fisheries District biologist for Kentucky Fish and Wildlife. “We did our annual population sampling the following month, and the number of largemouth bass we found were still double what we want for Beaver Lake.”

“We want to be proactive and prevent a bottleneck of fish 8 to 11 inches long,” Baker said. “This removal will reduce competition for food among the younger age bass and improve growth rates for the bass near the 12-inch minimum size limit.”

“We plan to take bass under 6 inches from last year’s spawn and bass 7 to 9 inches from the 2016 spawn,” Baker said. “Most will go into the Cane Run arm of Herrington Lake. Largemouth bass reproduction is typically poor in the lower end of Herrington.”

The Fisheries Division manages Beaver Lake for bluegill and redear sunfish. Removing small bass allows panfish to thrive in the lake. “We’ve witnessed big improvements in the number of quality bluegill,” Baker said. “In our population sampling last spring, the numbers of bluegill that were 6 inches and longer exploded.”

Baker also said before the improvement, each hour of population sampling landed 50 to 75 bluegill over 6 inches. “Now, we see 200 to 250 per hour,” he said. “We also saw our highest rates ever for bluegill 8 inches and longer.”